Too many words have been written about the verbal infelicities of the current US president for me to add many more. But Mr Bush has, usually unwittingly, added many neologisms to our vocabulary, such as misunderestimate, mential, arbo-tree-ist, and embetterment, as well as provoking Bushism to describe them.

It was his verbal mannerisms that led Allan Metcalf to write this study of the writing and speaking styles of the various holders of the office, and the words and phrases which they have contributed to the language. Thankfully, Bush’s blunderings — Professor Metcalf says they exemplify “the ruinous effect of a high-class education” — form only a small part of the work. 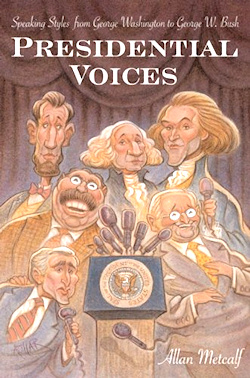 He points out that George Washington is the first known user (not necessarily the same thing as inventor, of course) of bakery and indoors among many others; that John Adams was the first to write down the word caucus (although he certainly didn’t invent it); that Theodore Roosevelt named the lunatic fringe and invented a new meaning for muckraker, as well as creating nailing jelly to the wall as a graphic description of a futile act; that Harry Truman provoked whistlestop in our current sense and rendered famous the buck stops here. Professor Metcalf is sure that Jefferson made by far the biggest contribution to the permanent vocabulary of our language, adding such words as Anglophobia, electioneering, indecipherable and authentication.

By no means every linguistic contribution by US presidents has been welcomed. Jefferson was much criticised for belittle; Warren Harding’s use of the then rather rare normalcy caused much debate on both sides of the Atlantic. These are now established — though the latter is largely restricted to the USA — but others, such as Washington’s jabble, meaning “to mix together”, or John Adams’ qualminess, for “nausea”, have been less successful.

This book provides an intriguing sidelight on the histories of the US presidents and will interest anybody who wants to know more about their impact on the language.