The New Partridge Dictionary of Slang

Eric Partridge was a pioneer. He spent most of his life working in that most intractable of lexicographical specialisms, slang. It is inconceivable to us today, when dictionaries are produced by teams of professionals supported by massive electronic archives, that his Dictionary of Slang and Unconventional English was created in 1937 as a solo effort. Like some similarly placed predecessors, such as Johnson and Webster, he became an eponym. His work went through seven editions, plus an additional posthumous one edited by Paul Beale in 1984. 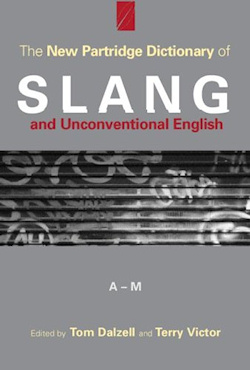 But his idiosyncratic approach has since been shown to have resulted at times in errors of dating and etymology based on extravagant extrapolation. Not for him the cautious conservatism of the Oxford English Dictionary, with its mantra of “origin unknown”. He was much more a philologist, a lover of words, than a scholarly lexicographer and he was always prepared to step beyond the evidence to say something about a word, even if his comments bordered on guesswork. In later years, he wasn’t at ease with the slang of the post-war generations, for which he had poor cultural appreciation.

So anybody who takes on the task of revising his dictionary has the enormous and unenviable task of weeding out the master’s mistakes while updating it and maintaining the reputation of the brand. Tom Dalzell and Terry Victor, respectively American and British, have taken on the job, in the process continuing an essentially amateur approach (in the best sense), since Mr Dalzell’s day job is as a lawyer and Mr Victor is an actor, broadcaster and writer.

At first glance, the work is a substantial improvement. It’s now in two large volumes (with, one has to regret, a whopping great price to match). The typography is easily the best of any current slang dictionary and gives a clean and authoritative feel. A bibliography rounds off the second volume.

Most entries include citations or references to sources, but a heavy price has been paid for their inclusion, even given the great increase in size. The work is much less comprehensive than either its previous incarnation or the current edition of Jonathon Green’s work (which continues to rely quite heavily in places on Partridge) and the loss is largely in the historical slang that so fascinated Eric Partridge. The editors have chosen to concentrate on slang recorded in use after 1945 and this has transformed the style and coverage of the work, to my mind ripping the heart out of it. In many cases it has had an unfortunate side-effect of divorcing slang terms from their historical hinterlands.

One of the failings of the original work was its over-emphasis on British slang, excluding in particular much vocabulary from the US. The new edition has reversed this and has a considerable American contribution, perhaps excessively so, with British entries seeming weak by comparison. It is now very strong on Caribbean, Australian and New Zealand English, through the efforts of a group of collaborators.

Many individual entries raise questions. It’s good to see that the computer slang senses of hack are carefully distinguished (the editors are generally excellent on the current jargon of the Net and computing), but where are the US slang senses of an old, dilapidated vehicle, or the military punishment of being confined to quarters, both of which Jonathan Lighter documents in the Historical Dictionary of American Slang as being in use post-1945?

The editors give nadgers, British slang for the testicles, a date of 1998, though it is most definitely older — they mention the all-purpose (and well documented) Goon Show expletive use in the 1950s but ignore evidence that the word had even then taken on its modern sense (if, as they say, it is from gonads, no other conclusion is possible). Their etymologies for the origin of naff (unappealing, in poor taste) are unconvincingly folk etymological and leave out the probable origin from Polari (even though it appears in a quote under that word).

They say peep show is American, from 1947, but their sense of a place where one could view pornographic images is much older in British English. It was certainly known in 1900 when H G Wells wrote Love and Mr Lewisham: “Try as we may to stay those delightful moments, they fade and pass remorselessly; there is no returning, no recovering, only — for the foolish — the vilest peep-shows and imitations in dens and darkened rooms.” They define goombah as meaning “a loyal male friend; an Italian-American”, which is fine as far as it goes, but why no mention of the senses of a member of a criminal gang, a Mafia boss, or a stupid person? Or indeed where it comes from (Italian compare).

The bob’s your uncle entry uncritically tells the Arthur Balfour nepotism story with the cop-out introduction “most commentators offer ...”. Readers don’t want to know what most commentators say; they want to learn what the editors have concluded on the basis of their own research.

Their country of origin and dating — as with nadgers — is always based on the first recorded use. This can mislead in the case of slang; it is often only committed to print when the fashion for a word is already waning, and its first appearance can be divorced from its true locale by an accident of recording. Piece of cake has a date of “US, 1936”, but the entry says it was originally RAF slang, so necessarily British; in one sense they are right, as the first known example is from an Ogden Nash work of 1936, but putting the two bits of data together without further explanation causes confusion. Likewise with sugar daddy, whose dating (“UK, 1926”) is from the OED’s first citation; however, a search in a newspaper archive throws up earlier examples from the USA, supporting the view that its true provenance is on that side of the Atlantic.

Was Palace of Varieties ever slang for the House of Commons beyond the 1966 joking diary reference by Gyles Brandreth that’s cited in the entry? The work includes other entries that similarly look like nonce forms. For example, was palintoshed ever a real-life slang term meaning drunk, beyond some joker’s submission of it to a BBC1 TV programme in 2002? It seems that the editors have at times relied on the appearance of terms in glossaries and books without confirming by further research that they ever had a real circulation.

The revision is a brave try and there’s a great deal that’s worth having in it. But it’s sad to see so much historical material has been lost and that some entries raise queries or could be improved. Like the proverbial bad apple in a barrel, such entries contaminate the whole. I cannot recommend it.