For the past half-century, the dominant view in linguistics has been that human beings uniquely possess a hard-wired concept of language. This implies that all languages are related at a deep level, because all of them are created on the same fundamental grammar template. It explains how a child is able to readily learn any language.

The idea, called Universal Grammar, was created by the linguist Noam Chomsky in the 1950s and has been enormously influential, not only in linguistics but also in fields such as psychology and philosophy. It’s still the standard view in most textbooks and has been popularised by Steven Pinker in The Language Instinct and later books. 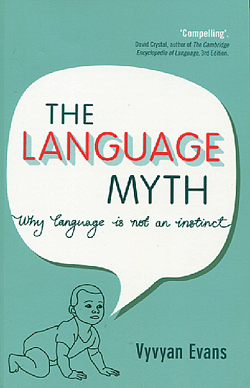 However, the concept that language is an instinct, and a uniquely human one, has been challenged as a result of research in a number of fields in recent decades. We now know much more about how children acquire language, the diversity of the world’s languages, the evolution of the human species, the structure and function of our brains, and the ways in which other animals communicate.

A vigorous debate is raging. Vyvyan Evans, the professor of linguistics at Bangor University in north Wales, has written The Language Myth to bring together the growing evidence against Universal Grammar.

For example, Chomsky’s view that this instinct for language is unique to humans and arrived suddenly as a mutation about 100,000 years ago cannot be true. Our complicated vocal apparatus, with the sophisticated brain necessary to manipulate it to utter and remember speech, couldn’t have been the result of a single sudden change but must have evolved stage by stage among our hominin ancestors. Neanderthals had similar vocal anatomy to ours and so were very probably able to communicate through speech.

One implication of Universal Grammar is that there must be some module or faculty in the brain, present at birth, dedicated to processing grammar. Though the brain does have sections devoted to specific functions, such as Broca’s area, responsible for the creation of speech, we know now that this area does other jobs as well and that the work of processing language takes place quite widely across various parts of the brain. A grammar module as such doesn’t exist.

The truth, Professor Evans argues on the basis of current research, is very different. Babies are not born with a set of internal rules but with a universal capacity to learn about themselves and the world around them. The brains of infants are plastic: experience and discovery moulds them and acquiring a language is one aspect of this.

Professor Evans also partly rehabilitates a theory developed in the 1930s by Benjamin Whorf; a version that was developed after Whorf’s death is called the Sapir-Whorf hypothesis, after him and his mentor Edward Sapir. Whorf called it linguistic relativity, arguing that speakers of different languages conceptualize and experience the world differently. This has been denied by followers of Chomsky’s work, since if true it would refute the view that language is innate and universal. Subtle neurological experiments in the past couple of decades have suggested that at an unconscious level people can be influenced by the nature of their language.

The Language Myth is a wide-ranging polemical dismissal of the received wisdom of many linguists. It’s worth reading also as a classic case study of an orthodoxy undergoing what Thomas Kuhn called a paradigm shift.