I’m Not Hanging Noodles on Your Ears

With that title, what other adjective could one use to describe the book than “quirky”? It’s a compilation by Jag Bhalla, who describes himself as an amateur idiologist, or student of idioms. He presents a thousand or so amusingly odd examples from around the world. Many have been illustrated by the New Yorker’s cartoonist Julia Suits. 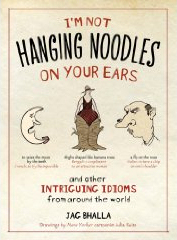 An idiom is an expression whose meaning can’t be deduced from those of the individual words. If you say that you’ve nipped a problem in the bud, put a spoke in someone’s wheel or hauled a worker over the coals, complain that a relative is the black sheep of the family or that your ears are burning, you will be understood by other native English speakers, but run a severe risk of confusing foreigners.

Similarly, Jag Bhalla claims that in Colombia, a Spanish speaker might say he has been swallowed like a postman’s sock, by which he means he is hopelessly in love. This might be because the object of his love has thighs as shapely as banana trees, in Bengali a compliment to an attractive woman. But if the tomatoes have faded, as a Russian might put it, love has gone; Arabic speakers are said to express the same idea through commenting that you’re getting on each other’s heads. You may indeed be like a dog and a monkey, a Japanese way of saying you’re on bad terms. Trying to comprehend the reasons for such idiomatic constructions is like climbing a tree to catch a fish, a Chinese way of voicing the idea that a thing is impossible, or trying to seize the moon by the teeth, a French equivalent.

The author is frank in his introduction. He says that he has relied on the translators of his reference books for all his examples and accepts that native speakers in some cases might not recognise the references because the idioms are obsolete or the translator got it wrong. He also says, “This horde of plundered international idioms is intended for low-commitment sampling and easy reading.” It’s definitely for dipping into, not for reading all the way through at once.

The title, by the way, is said to be a Russian idiom. Its English equivalent is “I’m not pulling your leg”. Seriously.