On being criticised by Kermit in a long-ago edition of The Muppet Show, Miss Piggy flounced, tossed her head, rolled her eyes, placed one trotter on her ample bosom and cried, “Pretentious? Moi?” In the system of flagging used by this book, moi is given the highest possible pretentiousness rating of three exclamation marks.

The idea behind this helpful little guide by Philip Gooden, reissued in paperback last month, is firstly to explain puzzling expressions from other languages that have made their way into English, and then in many cases to warn prospective users of the risk of sounding like a pompous prat. 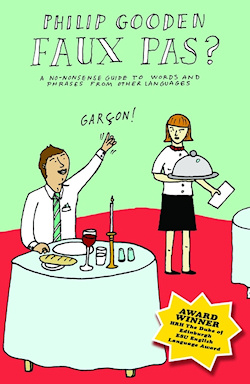 But a high proportion are attached to warnings about potential misuse: don’t use words like perestroika, glasnost, or gulag outside their historical Russian contexts; karma is too often used sloppily to mean just fate, whereas in Hindu and Buddhist belief it refers to actions in this life that will affect your status in the next; only use Götterdämmerung if you really mean the world is to end in smoke and flame; never describe a lady as being d’un certain age when you mean she’s middle-aged; do avoid canaille, the rabble or the mob, Mr Gooden points out, since it comes “with an in-built aristocratic sneer” that you will almost certainly wish to avoid.

Miss Piggy’s usage is in a select group of only four expressions that get the top pretentiousness rating. Even moi, he noted, is most often used in a mocking, self-deprecatory way to defuse a preceding statement that might be thought to be pretentious. The others are dégringolade, decline or fall into decadence, rarely found in English and which Mr Gooden points out is more or less the preserve of a single (unnamed) newspaper columnist; au contraire, on the contrary, disparaged because of “the slightly camp context in which it’s usually found”; and quartier for a district in a (French) town or city, which he argues deserves the full raspberry because it sounds ridiculous or precious if used about a district of a British city (“We have suburbs.”)

Well worth the small investment involved.