The Stories of English

David Crystal is a writer and broadcaster on language. He is best known as editor of the Cambridge Encyclopedia of the English Language (which, incidentally, was reissued by the Cambridge University Press in a revised second edition last Autumn). 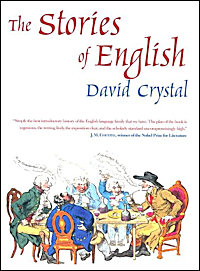 In this book he focuses on what he calls the “real story” of the way that people have used English down the centuries and continue to do so in slang, e-mail, text messaging and in the many varieties of international English. He argues that there has never been a monolithic, unitary English language. “A richness of diversity exists everywhere,” he writes, “and always has, over the language’s 1500-year history; but the story of Standard English has hitherto attracted all the attention. The other stories have never been given their rightful place in English linguistic history, and it is time they were.”

Elsewhere he remarks that the book “gives admiring recognition to the centrality of language variation and change in human affairs”. That variation has never been so great as it is now, when only one in three speakers of the language have it as a mother tongue and when its homeland contributes only a few percent of its regular users.

One of the curiosities he discusses is why we speak English at all. Conquerors usually impose their language on the vanquished, so why didn’t Norman French supersede English after 1066? He points out that the Norman invasion involved comparatively few people, who took over the top positions and imposed French on the court and legal system but who necessarily left the mass of the population to continue speaking their ancestral tongue. Eventually, the weight of the majority was too great for the usurpers, for whom French became a foreign tongue, albeit a fashionable and influential one. After 300 years of subservience, to Latin as much as to French, English returned to official life in the fourteenth century in many respects a new language, with its lexicon heavily influenced by both languages and with much of its grammatical complexity removed.

Among many other subjects, David Crystal examines the forces that led to a standard English arising out of the mixture of dialectal and regional forms that composed the newly resurgent language. Despite the common belief that it was the introduction of printing that forced convergence, he finds that legal, literary, religious and other pressures towards a standard were there rather earlier. Indeed, he suggests that pioneering printers such as Caxton put standardisation back a generation by circulating large numbers of copies of works that lacked a consistent style. It took another century for printers to begin to work to common standards and more than 200 years more before a true standard emerged. Though he is as scathing as any modern linguist about the misplaced efforts of eighteenth-century grammarians to impose structure on the language, efforts that have bedevilled the study of English almost to the present day, he makes clear that their efforts were entirely in the spirit of the time, in which English was regarded as an anarchic mess, desperately in need of formalising.

Though David Crystal writes very readable prose, largely avoiding technical terms, his is a detailed series of stories that are not a casual read. It is too big a book, in scope and detail as well as in physical size, to be taken at one gulp or easily summarised. But for anybody with an interest in how our language has evolved, it’s a fascinating tale.