British scientists were recently reported to be working on a force field to protect astronauts from radiation on the space station and space shuttle, on interplanetary journeys or while working in the projected NASA moonbase. We take such language in our stride these days, when science-fiction concepts seem to become reality almost month by month. But if you go back more than a couple of generations, words like these were mainly the preserve of people who wrote and read science fiction. 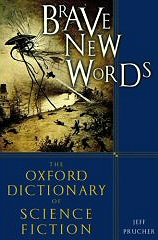 This book — edited by Jeff Prucher — is a pure dictionary, albeit with a few mini-essays on aspects of SF vocabulary; each entry is supported by a number of example citations, just as in the Oxford English Dictionary. Here you will find hyperspace, organlegger, phaser, ramscoop, spacesuit, Dyson sphere, generation ship, terraforming, holodeck and hundreds of other terms familiar to SF readers and viewers, plus a lot that are less so, even to those who are well-read in the field.

Also included are abbreviations like BDO (Big Dumb Object), a mysterious object of alien origin found somewhere out there (think of Larry Niven’s vast creation, the star-girdling ribbon of life called the Ringworld) and BEM (Bug-Eyed Monster), any stereotypical alien creature of hideous form created through authorial imagination to terrify and fascinate. The genres of SF are here, too, such as cyberpunk, slipstream, new wave and steampunk. It also includes the vocabulary of people who engage in SF fandom (fan activities), who attend cons (conventions), who compose and sing filk songs (folk songs with SF leanings, a name borrowed from a misprint), take FIAWOL as their motto (Fandom Is A Way Of Life) and are gutted when they have to fafiate (from FAFIA, Forced Away From It All), leave the world of cons and fans and return to mundania, the mundane everyday world.

Cross-fertilisation between SF and the real world of technology and science has been so great that it is often difficult to know where the stimulus for a term has come from. Was it created within the SF field and subsequently widened its appeal, or did SF writers take over and build upon an existing term? It would be good to have this made clearer in the text at times, at least where we know for sure.

Hyperspace, for example, is correctly glossed to point out that it was a term in mathematics long before SF writers got their hands on it. On the other hand, completist is dated to an SF source of 1944, eleven years before the OED’s first example, so seems to be a term of SF origin; likewise gas giant (a very large planet made largely from gaseous material) appears in an SF context 13 years before the first citation in the OED’s entry, which was drafted as recently as 2006 (respect to editor Jeff Prucher and his team for that one). Insectoid looks like a word that has been around for centuries, but turns out to have been first used in an SF work by Olaf Stapledon as recently as 1937. Casual readers, however, might be confused by the inclusion of an entry on gadget and assume it’s a term of SF origin, first noted from 1942, whereas it was popularised by Rudyard Kipling in 1904 and is actually a sailors’ term going back at least as far as 1886.

The choice of entries seems somewhat eclectic. Some words that you might think are SF-oriented enough to be here are absent, such as astronaut, no doubt because it was created in the mainstream astronautics field rather than SF ( astroengineering is also omitted, though astrogation is in). But space station isn’t here either, although it was first recorded, in the genre, in the 1930s; nor is space habitat (often just habitat), an artificial world; this might be a spinning hollowed-out asteroid or an artefact of similar type constructed from scratch, such as Babylon Five (they’re called O’Neill cylinders after their inventor, Gerard K O’Neill, another unglossed term). Kryptonite is absent, alas, as is H G Wells’s gravity-blocking material cavorite. Why does COA (Change Of Address) merit an entry? Clarke’s laws are included, each individually glossed and listed under the name of their creator, the British SF and science writer Sir Arthur C Clarke, the most famous of them being his Third Law (“any sufficiently advanced technology is indistinguishable from magic”). But where are Isaac Asimov’s much more famous three laws of robotics? They appear in no entry, neither under his name nor under robot or its derivatives (ah, there they are, briefly mentioned in passing on page 125).

It’s easy to nitpick. This is a pioneering attempt to apply the best techniques of lexicography to record the vocabulary of the field, one notoriously difficult to cover because of the number of neologisms for imaginative concepts that writers are forced to invent, or take joy in inventing. Jeff Prucher and his readers have scoured the literature for the history of the genre’s language. If you’re interested in the back-story of SF’s vocabulary, this is a reference work you will want to own.