Reviewed by Dick Pountain. He is a British technical author and editor who wrote both the New and the Concise Penguin Dictionaries of Computing; in the 1960s he was involved with the situationist group King Mob and wrote on politics, music and film for the underground magazines Oz, Ink, Friends, Cream and more.

While collecting vocabulary for this excellent blues dictionary, lexicographer Stephen Calt faced a major problem: white folks done stole the very words from the mouths of those poor (often blind) rural singers who invented this popular art form in the first third of the 20th century. 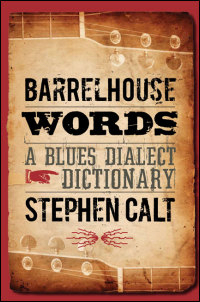 The blues enjoyed a brief fashion in the UK in the 1960s, which is when I discovered it through the songs of Robert Johnson and Blind Boy Fuller. In the US, of course, it became popular earlier, crossing over from just black audiences to fans of folk and roots music and forming the basis for rock ’n’ roll; it has never gone out of fashion there. Much has been written about its founding contribution to white rock music, for example through its influence on performers such as Janis Joplin, Bob Dylan, Canned Heat, Jimi Hendrix, the Beatles, Fleetwood Mac and the Rolling Stones.

Regrettably this process robbed blues lyrics of most of their bleak and fragile poetry, emphasising only their hedonistic worship of sex, booze and drugs. To sidestep this pollution Calt deliberately restricted his search field to the period between about 1900 and 1930 when blues was still being made and consumed by black audiences, either on 78rpm shellac records or live in the barrelhouse of the title (an illegal rural combination of bar, brothel and gambling den).

Stephen Calt’s tone is demythologising throughout, showing that the lexicon of the blues was drawn almost entirely from everyday speech. Exotic constructions such as first thing smoking, jelly roll and diddy wah diddy were actually common in the period and many can be traced back to old English usages of the plantation owners. Calt stresses that the concerns of the blues were the tribulations of post-slavery rural poverty rather than artistic expression for its own sake. Above all it was a music by and for grown-ups, albeit struggling and deeply dissatisfied ones.

Consider the word mojo. Calt explains that this originally meant a lucky charm in the shape of a hand, often worn between the legs, by gamblers and by women (against infidelity). It may derive from the West African Fula word moco’o, a medicine man, or from Gullah moco, meaning witchcraft or magic. It’s now the name of a successful magazine for middle-class white rock fans, and a jokey term of macho boasting about one’s power and influence that’s used by everyone from TV comedians to Wall Street brokers.

An enormous strength of his dictionary is that every definition is illustrated with a complete stanza from a blues song in which it occurs, making it a joy to read as well as a valuable reference. For more than 40 years I’ve been puzzled by one line in Robert Johnson’s 1936 Come On In My Kitchen:

Aw she’s gone, I know she won’t come back,
I taken the last nickel, out of her ‘nation sack.

but Calt explains it succinctly thus “A pouch worn by jukehouse proprietors to collect proceeds from food and drink, hence its formal name, donation sack.” Deciphering that term altered the whole context of the song in my mind.

I found just one definition that I’d dare question, and that’s rumble seat, which in Calt’s definition has nothing directly to do with the US term for a folding seat at the back of a vehicle (we Brits would prefer to call it a dicky), but is simply a humorous euphemism for the backside. I’d bet it specifically refers to an obsolete style of underwear with a rear-opening flap, as in “Mississippi” John Hurt’s great line:

With rosy red garters and pink hose on my feet,
Turkey-red bloomers with a rumble seat.

Stephen Calt’s book is not just a great contribution to blues scholarship but a resource that any blues lover will want to keep close by.