This work is really going around under an alias, as it’s a British edition of the 1988 Barnhart Dictionary of Etymology, a respected work from the US which until now has been available in the UK only by a pricey purchase from a transatlantic bookseller. 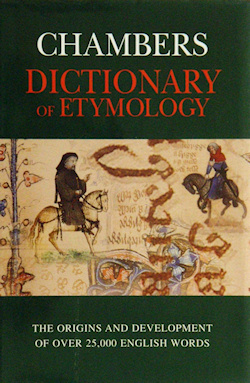 It has the same text as the original from the H W Wilson Company and indeed, to judge from the printing, seems to be a facsimile. Chambers have added the book to their stable of works on the language that includes the idiosyncratic and famous Chambers Dictionary and the Chambers 21st Century Dictionary, a new edition of which has also just come out.

There are quite a number of books dealing with the origins of individual words, but most are highly selective in their choice of terms and they are variably reliable. (The best and most scholarly is probably John Ayto’s Dictionary of Word Origins, but I would also mention The Merriam-Webster New Book of Word Histories, which has longish articles on a small range of key words.)

There are other, more formal, dictionaries of etymology available; for example in Europe Klein’s Comprehensive Etymological Dictionary of the English Language, but they are frequently difficult for the non-linguist to understand, and they are uniformly expensive. The Chambers Dictionary of Etymology is different on both counts — it is reasonably priced, and it is written in a way that is easy to consult without losing its scholarly integrity. Entries are in clear prose, with Greek terms transliterated into Roman spelling, and pronunciations added for difficult headwords.

Since this edition is the same as the original American one, these pronunciations are for American rather than British English and they use a key developed from normal English spelling, avoiding the typographic conventions of the International Phonetic Alphabet (IPA) that many people find difficult to use. This makes Chambers’ works non-uniform, as the Chambers Dictionary has its own (rather different) scheme, and the Chambers 21st Century Dictionary uses IPA.

This book will be most useful to students of the language and to general readers who want more detail than can be gleaned from the average dictionary. Despite its physical size, approaching that of a desk dictionary, its scope is limited to the most common 25,000 or so words (only a small proportion of those in the average desk dictionary, though many more than in the other works cited above). Deep delvers will need to seek out a more detailed etymological work for less common terms. And its 1988 date of publication means that very recent words are excluded.