Q From Roger White: I have just read Lifting the Latch, which is the story of Mont Abbott’s work on the land in Oxfordshire in the first half of the 20th century. The phrase “Brusher were the yedsirag over all the steam ploughs” appears in it. The glossary defines yedsirag as meaning head man, foreman. I can’t find any reference to this word on the web, can you shed any light on its origin?

A This is an interestingly obscure expression from English dialect, which survived until fairly recently in the speech of a few very old people. Mr Abbott must have been one of the very last to know and use it. In that spelling it only turns up a couple of times in the records I’ve been able to search. The book has another example:

Chisel were the only true ringer among us so we made him yedsirag, Captain of the Tower.

Lifting the Latch: a Life on the Land, Based on the Life of Mont Abbott of Enstone, Oxfordshire, by Sheila Stewart, 1987. 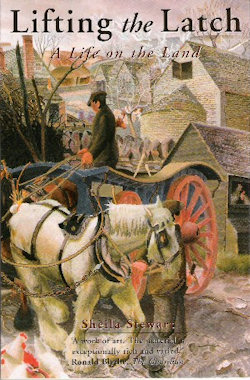 It took some delving to find the source because it’s not recorded well and because most appearances are phonetic transcriptions of local dialect speech. Researchers for the English Dialect Dictionary of the late nineteenth century recorded it in a variety of spellings across a swathe of central England. Here’s another example:

The Folk-Speech of South Cheshire, by Thomas Darlington, 1887. Mesterin’: acting like a master, an employer.

There’s no mystery about yed, which is a common dialect form of head. The rest is a locally modified version of the phrase Sir-Rag. You may be surprised to learn that there’s an entry for this in the Oxford English Dictionary, but it was at one time a fairly common colloquial term.

To be called Sir-Rag was hardly a compliment. The sir here was a mildly mocking familiarity, borrowed from the usual form of address for a titled person. Sir-Rag might suggest that you adopted airs above your station but more probably that you were a supervisor or overseer of a group of workers of low status:

“This strange word Sir-Rag is common in the Midland Counties, and has been for very many years. I knew it, and very often heard it, when a boy. The chief of a band of servants or workers, a foreman or overseer, or any one in authority over others, is the “sir-rag.” Sometimes he or she is the “head sir-rag.”

Thomas Ratcliffe of Worksop, writing in Notes and Queries, 15 Aug. 1891.

Another contributor to the same issue supplied a different sense of the phrase, “A dusty set of tatterdemalions ... constantly attend fairs and racecourses, and these poor scarecrows used to be called in my young days ‘Sir-Rags.’”

This form survived until quite recently: one reader has told me that he encountered it in Nottingham in the 1970s, though in the clipped and almost unrecognisable form ’eds’rag.

Older readers from Australia and New Zealand have told me of a local expression that looks hauntingly similar: head serang, or head sherang, for a boss or a person in charge, again in a gently mocking or ironic way. It has a very different origin, from the Anglo-Indian serang (the spelling that appears in the Macquarie Dictionary), originally from the Persian sarhang, commander. Yule and Burnell defined it in Hobson-Jobson, their huge compilation of Anglo-Indian expressions of 1886, as “a native boatswain or chief of a lascar crew; the skipper of a small native vessel.” However, the similarity to the older British expression, which would certainly have been known to nineteenth-century migrants, is so striking that it must surely be linked and presumably accounts for the addition of head to the Anglo-Indian word.

After all that, you now have most of the information that you need to translate “Brusher were the yedsirag over all the steam ploughs”. This is a fuller quote:

I were on the last lap of the day, longing for me tea and our Mam’s roly-poly, when ‘Brusher’ Becket came into the field waving a telegram. Brusher were the yedsirag over all the steam-ploughs.