Q From Jonas Withers: I’ve just read that somebody had become a whipping-boy. Where does this come from? Was he ever a real boy?

A He was, and it’s one of the stranger stories in word history.

First off, a whipping-boy is a scapegoat, a person who suffers punishment because of the faults of somebody else. Here’s a recent example:

Sorkin is well aware that he is a whipping-boy for a swathe of America — he’s the preppy liberal with a big ego they love to hate.

These days, whipping-boy is as figurative a term as scapegoat. We don’t any longer load all the sins of a community on to a goat and send it into the wilderness and similarly we don’t chastise a child for the naughtiness of another. But we once did.

The term seems never to have been attached literally to anybody much below the companion of a prince. The earliest on record — though no doubt there were previous examples — was an Irish lad named Barnaby Fitzpatrick (or Fitzpatric or Fitz-Patric). His father sent him at the age of six or thereabouts to the English court in 1543 to be a companion to Prince Edward, later Edward VI. He was said to have been regularly punished for Edward’s misdeeds. A play early the following century featuring the young Prince Edward features a fictional version of Fitzpatrick:

Prince: Why, how now, Browne; what’s the matter?
Browne: Your Grace loyters, and will not plye your booke, and your tutors have whipt me for it.
Prince: Alas, poor Ned! I am sorrie for it. I’ll take the more paines, and entreate my tutors for thee. 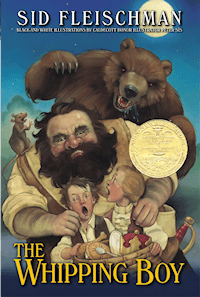 A modern take on the story

It has often been suggested that the system grew up because the prince’s tutors daren’t lay a hand on the prince and so punished his companion. It’s more probable that it was a better way of keeping the prince well-mannered than direct punishment, since he knew that if he transgressed his companion would suffer instead.

It must have been difficult for young Barnaby, but he briefly did well out of it. He became an intimate of the future king and was sent to France to complete his education. However, Edward VI died in 1553, aged only 15, and hope of preference vanished. Half a century later, in 1603, another boy, the even younger William Murray, was placed by his father in a similar situation with Prince Charles, later Charles I. Murray did better than Fitzpatrick: he later became the first Earl of Dysart and a confidant of the king, working even after Charles’s execution to put Charles II on the throne.

The term whipping-boy wasn’t around at the time of either of these boys — it was sometimes known as “punishment by proxy”. The first known user of whipping-boy was a clergyman named John Trapp in a Biblical commentary in 1647.