Q From John Hathaway: I know that somebody who says the apple cart has been upset means that somebody’s plans have been ruined, but why an apple cart rather than anything else?

A A figurative sense of apple cart has been around since the eighteenth century. For an unknown but probably trivial reason it’s actually slightly older than the literal use of the phrase.

In the earlier part of its life, the most common sense of apple cart in Britain was the human body. Francis Grose recorded down with his apple-cart in his Dictionary of the Vulgar Tongue as meaning to knock a man down; that was in 1788, although the same idea is on record from about 1750. It later became known in Australia:

He slapped her face, she seized a broomstick, and he capsized her “apple cart,” and broke two pannels [sic] of the door.

The etymologist Walter Skeat wrote in 1879, “I think the expression is purely jocular, as in the case of ‘bread-basket,’ similarly used to express the body.”

The form you’re referring to also appears early on. There’s an isolated example on record from Massachusetts in 1788 but it only starts to appear on both sides of the Atlantic in any significant way in the late 1830s:

They won’t encourage trade, or commerce, or manufacturing — because they know that trade, and commerce, and manufacturing would create a power right off that would upset their apple-cart.

The Whigs, Gentlemen, cannot object to the soundness of our old authorities in law, because, you know, they themselves are very fond of referring to the same source, when it suits their purposes; and to deny those authorities, therefore, would be at once to upset their own apple cart. 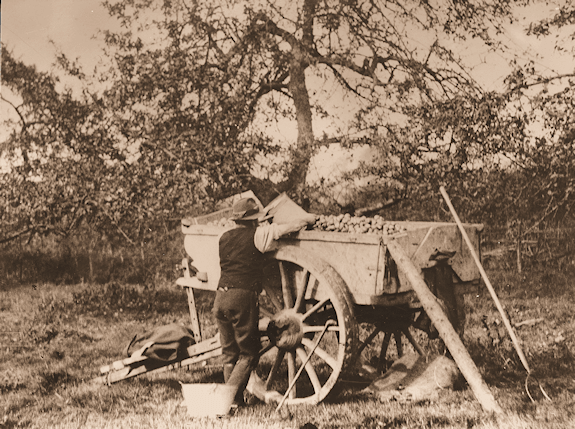 A cartload of apples, definitely not upset.

We may assume it was around in the spoken language in Britain, lurking out of sight, for longer than the written record shows. It continued in parallel with the human-body sense for most of the 1800s but took until the early twentieth century to become widely popular and to shift from slang to colloquial usage. An early stimulus may have been the widely reported comment by Cecil Rhodes, then prime minister of the Cape colony, that the Jameson Raid of 1895 had “upset the apple cart”. The evidence suggests a peak in the 1930s, possibly helped along by George Bernard Shaw’s play The Apple Cart, first produced in 1929.

The shift in sense from a slang term for the body to ruining a person’s plans seems to have been via an intermediate sense of suffering a personal accident, either involving some external object or simply falling over:

The bed groaned for a moment under the load, and the next moment the strings snapt like tow, and down came the bed, bedding, Dutchman and all, plump into the middle of the cabin floor. ... “You've upset your apple-cart now,” says I as soon as I’de [sic] done laughing.

If a child falls down you first inquire if he is much hurt. If he is merely a little frightened you say, “Well, never mind, then; you’ve only upset your apple-cart and spilt all the gooseberries.” The child perhaps laughs at the very venerable joke, and all is well again.

We’re quite unable to say why some unknown person 250 years ago selected an apple cart as a metaphor for the body because there’s no written evidence on which we can base any reasoned explanation. But we can understand why the idea remains popular in the sense of ruining some undertaking: the visual image of a cart laden with apples overturning — with all its implications for mess, inconvenience and financial loss — is too striking to lose.

It might be worth ending by mentioning an arcane suggestion for the origin of one sense. About 200 BCE, the comic playwright Plautus wrote a line in his play Epidicus that implied Romans had a proverb, perii, plaustrum perculi, which may be loosely translated as “I’m done for! I’ve upset my wagon!” Could this have been the stimulus for the English idiom, with some jesting Latin scholar turning the Roman wagon into a very English apple cart? It’s a nice story, but I suspect that native English wit was capable of creating the image without resorting to second-hand humour.