Q From Martin Schell: I enjoyed your recent piece on dingbat and noticed that one quotation mentioned type-lice. What does this term refer to?

A The species has not been well studied scientifically but has been identified on occasion as Pediculous typus or Pyroglyphidae typographicus; at one time it was called the typographical beetle. British printing shops seem thankfully free of the pest but a search among writings by American printers and newspapermen produced many descriptions of the damage that these little beasts could do. The Cedar Rapids Tribune of January 1947, for example, described them as “the traditional fly in the printer’s ointment”.

They were reported to feed on type, the resulting gnaw marks requiring the affected type to be thrown away. They liked to secrete themselves among type, sometimes, it was said, in the ﬄ and ﬃ ligature compartments of type cases where they would be least disturbed, They were often held responsible for errors in setting type and even of rearranging the type to make nonsense words.

This is how one Canadian publication explained them:

In the old days, when this newspaper was printed by means of what is called the hot-lead system, many so-called simple errors were caused by type lice. Type lice laid their eggs in the bottoms of galley trays. There they hatched. There they spent their lives. And there they created their havoc. If printers carelessly left the lead type in these galley trays for extended periods of time, the type lice would actually consume amazingly large quantities of lead, often making a’s look like o’s, turning 2’s into 3’s and worse.

The same article reported that in recent years type lice had built up such a strong natural immunity to insecticides that serious infestations of the creatures had made hot-lead composition all but impossible. The downside of consequent advances in technology, such as computer typesetting, has been a serious loss of habitat, leading to a severe decline in the numbers of type lice; if not actually extinct they are now restricted to small print shops still using hot or cold metal type. 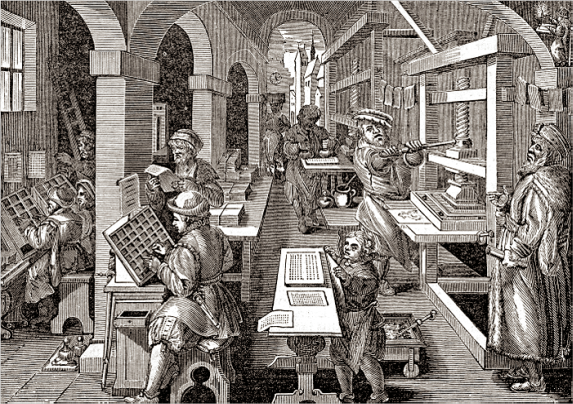 Type lice may have already in residence in early print shops such as
this Dutch one of the sixteenth century.

The first reported appearance of the type louse was in The Hancock Jeffersonian of Findlay, Ohio, in May 1869 (“the poor printer is often compelled to explain and show everything about the office, even down to the type lice”), though it’s hard to be sure this is the same species as others mentioned from time to time; as this description explained, type lice were difficult to conclusively identify:

The type louse is like the common Pediculus capilus, in that it is a wingless, hemipterous insect, but it is unlike in the fact that it is continually undergoing metamorphosis and no two persons ever saw the insect the same, nor no one person ever saw it twice in the same place or same condition.

Young apprentices, traditionally called printer’s devils, were often told about the lice by seasoned journeymen on first arriving in the shop, who would promise to show the boys an example. When one was spotted, the nuisance potential of the type louse was such that attempts to point it out invariably led to unfortunate consequences:

The foreman of the office where I began promised to show me a type-louse — and he kept his promise. One day while he was making up a form on the imposing-stone — that is, placing the set type between the column rules and sopping it down with a wet sponge, as printers do in country offices, he exclaimed, “Come quick, Newt — here’s a type-louse!” I rushed to his side. “Right there it is,” he whispered: “bend close to that type and look sharp!" I followed instructions and while I was rubbering diligently he socked together, under my nose, two sections of water-soaked type with great violence, whereupon the water squirted up into my expectant face and eyes.

As the Morgantown Dominion News wrote in March 1969, the type louse “played an important role in the training of the novice printer”, equivalent to the left-handed monkey wrench, ready-made posthole, tartan paint, spare bubbles for spirit levels and buckets of steam known in other trades.