Q From Colin Burt, Australia: In your piece on murder, meaning to eat with gusto, you advert to the title of the film, Topsy Turvy. This quaint expression for upside down or dishevelled, or all ahoo as Patrick O’Brian often calls it, must have an interesting history?

A It certainly does, though nobody is quite sure exactly what it is.

That’s because the expression is so old that detective work is needed to identify its components. It’s first recorded in 1528 but is almost certainly a lot older. Right from the beginning of its known history it could mean either upside down or utter confusion. We may guess that the former was the earlier sense and that the latter came along later as an extension from the idea of things being thrown about and ending up in a chaotic jumble. 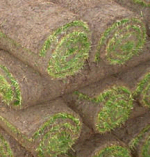 Rolled turves: these are not the origin of the term!

The Oxford English Dictionary comments icily that “numerous conjectures and suggestions (many of them absurd and impossible) have been offered”. One result is that the word has been written in dozens of different ways to reflect writers’ ideas about where it came from and what the “correct” form ought to be. One curious idea was that it referred to a practice of laying sections of cut turf (British plural turves, hence adjective turvy) face down to keep them fresh; another that it was once t’other way; a third that it was in some way connected with topsail (often said /tɒpsl/

The consensus is now that the source of the first element is the obvious top. The second part is probably from the long-obsolete verb terve or tirve, to overturn, which may derive from the Old English verb tearflian, to roll over and over or to wallow. The remaining puzzle is the -sy ending on the first word. It might be that an early form was something like top-so-terve, matching the pattern of up-so-down, an old form of upside-down. The OED also points out forms like arsey-versy as possible parallels.

So there are unanswered questions, as so often with old terms. But the framework is clear enough.