Q From Tom Crain: I was looking for the origin of tacky when I came across your site. I was hoping to find validation of my conclusion (based on nothing but my experience of living in the US for 63 years) that it may have come from quilting. By comparison to a handmade quilt, the workmanship of a cheap quilt made by the process called tacking may be considerably below standard. It is tacked together; therefore it is tacky by comparison. Could this be the origin?

In the sense that you mean — something exhibiting poor taste and quality — we don’t know its ultimate origin for certain, though the chance of its being related to the embroidery sense of tacking seems remote. We might instead guess it’s related to the other sense of the adjective — for something, such as paint or varnish, that isn’t quite dry and so is still slightly sticky. There’s no evidence for that, either.

In your sense, tacky is firmly located in your own country. It appeared first around 1800 as a noun, variously spelled as tackie or tackey. The earliest example is this:

At some places, you are thus asked, in local phrase, to truck or trade for a horse, a cow, or a little tackie, a term which signifies a poney, or little horse, of low price.

Communications Concerning the Agriculture and Commerce of America, by William Tathan, 1800. 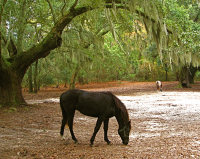 The horse sense continues in the name of the Carolina Marsh Tacky, a survivor of a breed of horse brought to the Americas by Spanish explorers. Such horses have existed for centuries as semi-wild herds in the marshes of coastal South Carolina and Georgia, though they are now rare.

The link with horses might lead to the idea that it has something to do with tack for horse harness, but the one can’t have led to the other, not least because tack in this sense dates only from the 1920s (it’s an abbreviation of tackle).

Web sites about the breed sometimes suggest that tacky is from an English word meaning “cheap” or “common”, but it’s the other way round — the adjective tacky in this sense certainly derives from the name for the horse. The link seems to have been the idea of a lack of breeding, since the horses weren’t considered to be of high quality (one nineteenth-century writer called them “scrubby”). Later in the century, tacky became a term for a “poor white” inhabitant of the southern states.

The adjective, enlarging on this sense of “ill-bred”, began to be written down in the 1860s and has been in use ever since, though the full flowering of its popularity came only in the 1970s and 1980s. It has since spread throughout the English-speaking world:

In the glitzy, and often tacky, world of casinos, Sydney’s Star City is the ultimate ugly duckling.

In large part, its renewed popularity came from ticky-tacky, derived from it in the 1960s to mean cheap or inferior materials. It was invented by Malvina Reynolds in her song Little Boxes (best known in a version by Pete Seeger), whose theme is the boring uniformity of suburban housing and the bourgeois nature of those who live there: “And they’re all made out of ticky tacky, And they all look just the same.”