Q From Anon: Could you shed any light on the origins of to steal one’s thunder?

A A splendid story is told about the origin of this striking phrase.

John Dennis was a literary critic whose life straddled the seventeenth and eighteenth centuries. Having spent his inheritance he turned to the theatre to make some money, though it turned out he wasn’t very good at writing plays. The last of them to grace the boards, Appius and Virginia, was performed at the Drury Lane Theatre in London in 1709. It ran for just three nights and then the management cancelled it. To help make the production effective, Dennis had improved an existing theatrical device to make stage thunder. Shortly after his play was taken off, Dennis was attending the first night of another play at the same theatre and was astonished to hear his thunder device being used. He leapt to his feet and shouted, “That is my thunder, by God; the villains will play my thunder but not my play!” 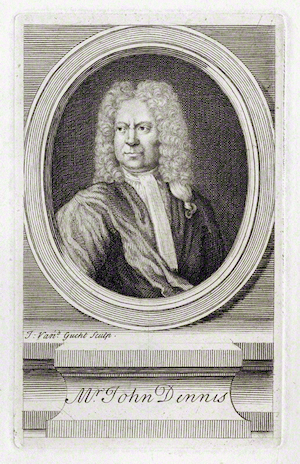 Did this incident ever happen and, if it did, was it really the source of the expression? Dennis’s biographer in the Dictionary of National Biography suspects (as Dr Samuel Johnson did much earlier) that it was an invention of Alexander Pope, the first person to mention it. Pope, a diminutive man but an excellent hater, may have been perpetuating a feud with Dennis. Among other exchanges, in 1711 Dennis had written of Pope, “that as there is a great deal of venom in this little gentleman’s temper, nature has very wisely corrected it with a great deal of dullness.” This is what Pope wrote, in a footnote to his most famous work:

Whether Mr. Dennis was the inventor of that improvement, I know not; but it is certain, that being once at a Tragedy of a new Author, he fell into a great passion at hearing some, and cry’d, “S’death! that is my Thunder.”

The Dunciad. With Notes Variorum, and the Prolegomena of Scriblerus (Second Edition), by Alexander Pope, 1729. The exclamation s’death is a short form of the oath God’s death.

Whatever the truth of the matter — and we shall now never know one way or the other — the tale about Dennis’s thunder was greatly improved by later retelling. Further details emerged two decades later:

If this Play had not so long a Run as it deserved, yet it was very successful in one Part of it, viz. the Thunder, which tho’ of our Critick’s own Invention, the Players had the Impudence to make Use of it in other Dramatic Performances, where that necessary Incident, is oftentimes introduced to keep the Audience awake. Mr. Dennis was very much enraged at this Piece of Theft, and could not help crying out aloud in the Pit, the first Time he heard it in another Play, ’Sdeath! that’s my THUNDER!

The Life of Mr. John Dennis: The Renowned Critick, Not written by Mr Curll, 1734. Edmund Curll was a famously unscrupulous London bookseller. The reasons for his denial of authorship are unclear.

The first known appearance of the exact phrase came a decade later still in a voluminous list of some 1,500 plays that was appended to a work by Thomas Whincop:

For this Play Mr. Dennis invented a new Kind of Thunder, which the Actors approved of, tho’ the Play was damned, and continued to use it, as they do to this Day. But Mr. Dennis, being a few Nights after the ill Fate of his own Play in the Pit at the Tragedy of Macbeth, and hearing it Thunder, could not help crying out alout [sic], That’s my Thunder; by G——! How these Rascals use me! They will not let my Play run, but steal my Thunder.

Scanderbeg, Or, Love and Liberty: A Tragedy, by Thomas Whincop, 1747.

There were other references throughout the century to the expression in this form and to the story about Dennis. These make it clear that, whatever the truth behind it, the story was the source. But the figurative phrase, to steal one’s thunder, to appropriate another person’s ideas, policies or discoveries as one’s own, didn’t begin to appear in print until the 1830s:

They resolved therefore, to punish the audacious editor that had stolen “their thunder,” and had dared to play with the bolts and fire of the ministerial Jupiter. They let fly the ministerial falcon, the eagle of the law, with swift-winged vengeance, and dreadful beak and talons to clutch the Radical plagiarist of their Whig schemes.