Q From Ali Nobari: Wodehouse uses the word snooter, presumably schoolboy slang, but what does it mean?

A It’s possible to get an impression of the meaning of this very unusual word from the contexts in which P G Wodehouse uses it. A couple of examples: 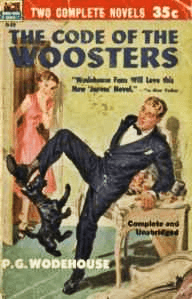 Those who know Bertram Wooster best are aware that in his journey through life he is impeded and generally snootered by about as scaly a platoon of aunts as was ever assembled.

Snootered to bursting point by Pop Bassetts and Madeline Bassetts and Stiffy Byngs and what not, and hounded like the dickens by a remorseless Fate, I found solace in the thought that I could still slip it across Roderick Spode.

To be snootered is to be harassed, vexed or tormented.

We might indeed reasonably assume that the word is slang from Wodehouse’s schooldays at Dulwich College in south London. But we would be wrong. We would be equally wrong to connect it with the similar snooker, whether the game or the derived verb meaning to put somebody in an impossible position or to trap or entice them. Wodehouse actually borrowed snooter from US slang during his early years in that country.

Snoot as a noun has been recorded there since the 1860s. It’s a local pronunciation variation of standard English snout, a word of Germanic origin that has been in the language since about 1200. The American version was looked down on:

Snoot, of the human face or nose, apparently the same word as snout. A vulgar word in New England. ‘I’ll bu’st your snoot’; ‘hit him on the snoot’. As a verb in ‘to snoot round’, i.e. to nose around, it is reported from Poughkeepsie, N.Y.

The verb evolved to mean treating a person scornfully or with disdain, leading to the adjective snooty — snobbish, supercilious or stuck-up, figuratively with one’s nose in the air in a superior way.

Wodehouse created snooter from snoot, presumably developing it from the sense of snubbing someone; he used it often enough — in at least eight of his books as well as in correspondence — that he became identified with it, so much so that the Oxford English Dictionary’s entry for the word has examples only from him. A couple of writers have since employed it, but it’s very rare.