Q From Paul Nichols: A sidekick is a person’s unofficial helper, assistant or aide and all around faithful pal and buddy. How did that term originate? American West, I’ll betcha.

A Since I only bet on certainties, I’m not taking that one. The early evidence does include examples from Texas but there are too few of them for me to be sure about its geographic origin. 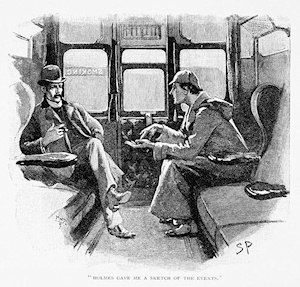 The one on the left is the sidekick, but being British he was never called that. Sherlock Holmes explaining the facts in the Adventure of the Silver Blaze to Dr Watson.

But I am sure that before the hero’s assistant and confidant was a sidekick, he was a sidekicker. The longer form was popularised by the stories of O Henry, who was writing in New York but as a young man had lived in Texas. The first example from his works is 1903, but it’s older elsewhere:

Guthrie, Ok., Dec. 25. -- “Tulsa Jack,” side kicker of the late bandit Dalton, and a gang of eight men rode into Ingalls and declared that Bill Dalton had been betrayed by a saloon keeper named Nicholls and proceeded to demolish his saloon.

It’s a relative of a rather older and much more obvious American colloquialism, side-partner, for one’s colleague, counterpart, buddy, mate or opposite number. That dates to the 1850s, if not before:

We think that the evidence establishes the charges, and the excuse of Mahon cannot be received as sufficient, as he should have notified his side-partner in case he was taken sick on his post.

The side part is easy enough to explain. It meant a person who was literally or figuratively at one’s side. The most likely source for the second part is an old sense of kick, meaning to walk or wander (the idea is of idly kicking stones) that turned into kick around or kick about, to hang around. Those are recorded in the US from the 1830s. So a sidekicker, later a sidekick, was a friend you kicked around with.

Etymological confusion has been caused by the application of kick in pickpockets’ slang in the early years of the twentieth century to a trouser pocket and specifically side kick to the side pocket that was hardest to steal from. This has led some writers mistakenly to invert the order and argue that the pickpocket slang was the source of sidekick and that the slang term for a buddy and its connotation of trustworthiness both came from it. Unfortunately for the tellers of trouser pocket tales, kick for a pocket was British slang, not American, whereas the buddy meaning of sidekick is definitely from the US and is also older.