Q From Natalie Teichman: I caught your interview with Bob Edwards on XM Satellite Radio. I wonder if you could tell me about an expression that my great-grandfather used to say: Sick abed on two chairs. My mother often repeated this as a favorite phrase of his, but none of us really knew what it meant. He emigrated from Somerset in 1874 and made his home in central New York State. He had been raised a Quaker in England and continued to use plain speech (thee and thou) throughout his life. I would love to know more about this curious phrase.

A Many thanks for your interesting question.

It defeats most of my standard references but the saying has been recorded several times. A couple of online sites mention it and I’ve found it in a newspaper advert that was published in December 1944 in the Bismarck Tribune of North Dakota. It also appears in a couple of recent books, including a story by Sylvia Thompson with that title, published in 1997 in a collection called The Quiet Center: “When I was little and what my grandmother called ‘sick abed on two chairs’ she would comfort me with pudding.”

The one source that gives details is the Dictionary of American Regional English (DARE), which quotes examples going back to 1939 and mentions that an older variation, recorded from 1914, was sick abed in the wood-box. At times the two forms were combined. DARE suggests that it was a regional expression, mostly from the northeast of the US (which would put the Dakota advert way out on a geographical and linguistic limb).

DARE says the expression was “used as a facetious response to queries about one’s health or to imply that someone is pretending to be ill or is slightly unwell”. Sylvia Thompson’s usage would fit the “slightly unwell” meaning, as does the 1944 ad: “Sick-abed on two chairs with your feet in the wood-box, or just lazy?” The idea would seem to be that you were slightly out of sorts, not enough to make you take to your bed but sufficient to make you want to sit in a chair with your feet up on another, or to sit close enough to the fire that your feet could, figuratively, rest on the box of logs.

Nothing beyond that suggests a source. It just might have been Somerset dialect, though both forms feel more North American than English; the English Dialect Dictionary, compiled at the end of the 19th century, doesn’t mention it and there is no example I can find in British literature. It seems most likely, since DARE’s location information fits with your great-grandfather having settled in New York State, that he learned it after he arrived. This is supported by references to both forms as Yankee expressions in advertising columns in the Hartford Courant of Connecticut in 1947 and 1953. 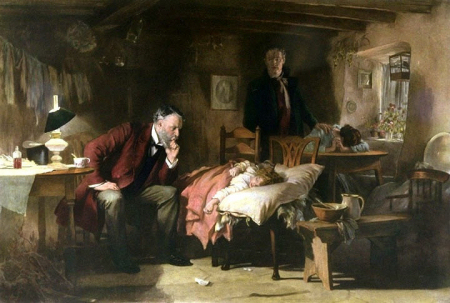 An image that sometimes comes to mind when the expression is used is this famous painting by Sir Luke Fildes, The Doctor, showing a sick small child sleeping across two chairs in a cottage. It was painted in 1891 and is in the Tate Gallery in London. It represents a much more serious situation than any so far mentioned. The painting was inspired by the death of Fildes’ first son and the professional devotion of Dr Gustavus Murray. The boy died on Christmas Eve 1877.

Comments from subscribers after this item first appeared suggests that widely different ideas exist about what it means. “I have a clear recollection,” e-mailed Donald MacLellan, “of this phrase being used by my mother and others in the early 1940s in Boston. We always interpreted it to mean that the ill person, due to dire social circumstances, lacked even a bed to sleep in. Instead, two chairs were lined up and the person slept in that position.” Heather Masterton wrote about friends in northern Maine: “The family (in the early 1930s) did actually make up a bed for a sick child on top of the curving logs in the woodbox. That way, the patient could keep warm next to the wood stove, and Mother could keep an eye on them without running up the stairs (not a favorite option with many children about). They always said someone was ‘sick in the woodbox’, meaning they got to stay home and be a bit pampered.” John Belshaw (born and raised in northwest England, but now living in Australia) said: “The phrase has meant to me an expression of illness something akin to ‘one foot in the grave’ — usually frivolous but intending to impart the meaning that one, or someone else, was not feeling at all well. The ‘two chairs’ I understood to be the chairs laid at each end of a coffin in order to support it (not an unusual situation) and the ‘bed’ of course the coffin itself.”