Q From Dave Hester: Any thoughts on the phrase, saucered and blowed? This referred to coffee, too hot to drink until it was poured into the saucer for a moment, blown on, and then drunk from the saucer. I’ve heard this phrase all the time in West Texas and New Mexico.

A The expression is certainly American, turning up at various times in the south and west of the country. I can’t find the exact form you mention earlier than this syndicated page-filler joke:

Don Herold tells of the woman bus passenger hurrying into a restaurant stop for a quick cup of coffee. It was too hot to handle. So an observing and gallant longhorn next to her shoved his cup over with: “Take mine, mam. It’s been saucered and blowed.” 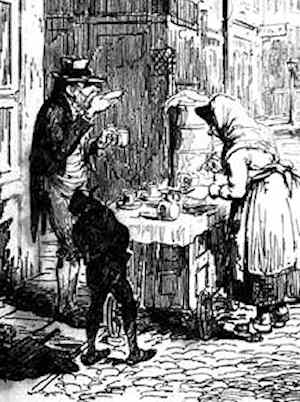 An extract from a George Cruikshank engraving showing a man saucering his tea.

The joke was widely repeated in various forms around this date and in the following decades. The implication, of course, was that only hicks from the sticks did such an ill-bred thing. William Morris, writing in one of his Words, Wit and Wisdom columns in September 1966, repeats a similar story and comments that he had heard it long before in Tennessee.

By this date, the phrase — also as saucered and blown — had become well-enough known that it had turned into an idiom, implying that a project had been completed or that everything had been taken care of and so there was nothing left to do. In the negative it meant something hadn’t yet been made fully ready — a football coach commented on one of his young players in the Charleston Gazette in 1972 that “He has a long way to go. He hasn’t been saucered and blown yet.” Here’s a more recent example:

Besides, I couldn’t have won the governor’s election anyway, since it was, in the Arkansas vernacular, “saucered and blowed” — over before it started.

The idea goes back a long way, of course, much further than the expression itself. A squib appeared in a British newspaper two centuries ago, in which a Frenchman asked a friend to advise on the correctness of his manners at dinner:

“And the coffee?” “There I am certain I was right; it was boiling hot, and I poured it in small portions into my saucer.” “Which was what no one else did; every body takes his coffee in his cup, and never in his saucer.” 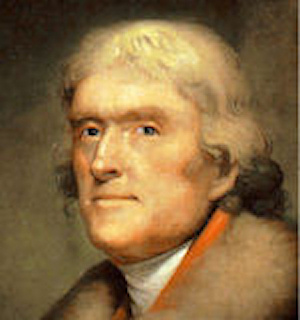 Well, I’ll be blowed, so Thomas Jefferson was a saucerer and blower?

A story about George Washington has been repeated many times; if true it suggests that the cooling technique is older still and even more upwardly mobile. He is said to have observed that the US Senate should serve as a saucer to cool impassioned legislation coming from the House. This is the earliest example of the tale that I can find:

“Why,” asked Washington, “did you just now pour that coffee into your saucer, before drinking ?” “To cool it,” answered Jefferson, “my throat is not made of brass.” “Even so,” said Washington, “we pour our legislation into the Senatorial saucer to cool it.”

Republican Superstitions as Illustrated in the Political History of America, by Moncure Daniel Conway, 1872.

A similar action was common in the working-classes in Britain in the nineteenth century and into the twentieth — it was thought acceptable to pour small quantities of hot tea into your saucer to cool it and then to sip from the saucer. However, the American joke implied that saucers in that country were then big enough that the whole cupful could be saucered at one go; British saucers were too small for this.