Q From Heather Upton, Los Angeles: I am curious about the saying safe as houses, which is more common in England than here in the States. What is it about houses that makes them so safe, compared with anything else?

A It’s not immediately obvious, I agree. And in the history of similes about security, safe as houses is a relative late-comer. You might at various times have been as safe as a bug in a rug (an alternative to the much older and better known snug as a bug in a rug), as a sow (or a crow) in a gutter, a mouse in a malt-heap (or in a mill or a cheese), as safe as a church, or a bank, or a fort, or a bunker, or simply as anything. Several of them suggest comfort or freedom from disturbance as much as physical safety. 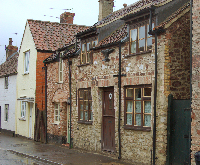 As safe as these?

Other expressions of similar kind imply certainty — a sure thing or a safe bet. As safe as eggs, for example, is a variant on as sure as eggs is eggs, which makes sense of a puzzling phrase, as eggs are notoriously unrobust. Likewise safe as the bellows, a strange expression of the 1850s, which appears in Henry Mayhew’s London Life and the London Poor (1851): “If you was caught up and brought afore the Lord Mayor, he’d give you fourteen days on it, as safe as the bellows”.

The reason for many of these puzzling forms is that at one time safe could mean “certainly; for sure; assuredly”, especially in dialect and colloquial English. The antiquarian Captain Francis Grose wrote in 1790, “He is safe enough for being hanged” as an example of Cumberland dialect, which meant that the person was certain to be hanged. Among other cases, The English Dialect Dictionary a century later includes “it is safe to thunder”, Lincolnshire dialect meaning it was sure to do so.

As a result, safe as houses has often meant something that was certain to happen. In 1894, Mrs Arthur Stannard, writing as J S Winter, used it in her novel Red Coats, “You know the Colonel is as safe as houses to come round after church parade.” In The Penang Pirate by John Conroy Hutcheson (1886) appears this: “If you was to strike one with a rope’s end — if only in lark, mind you, to make him move quicker — why, you’d be a dead man ’fore morning, safe as houses!” In Far From the Madding Crowd by Thomas Hardy of 1874 this dialogue appears: “‘He must come without fail, and wear his best clothes.’ ‘The clothes will floor us as safe as houses!’ said Coggan.”

There’s clearly more going on than at first sight we might think. After all this time, we can’t penetrate the minds of the inventors of the expression. But it’s unwise to draw parallels with related expressions. As safe as a church and as safe as a bank suggest the security of a physical structure. But the reference is probably figurative in both cases — to God’s protection and to financial security.

John Hotten argued in his Slang Dictionary of 1859 that safe as houses may have arisen when the intense speculation on railways in Britain — the railway mania — began to be seen for the highly risky endeavour that it really was and when bricks and mortar became more financially attractive. But that ignores the figurative nature of the phrase, which, even so early after its coining, must have had little in users’ minds to do with any actual building.