Q From Anne Breden: I was recently told that reticule, a lady’s small purse of the 18th century, was actually called a ridicule because some thought it was a silly fashion accessory. Is reticule the correct term, or is this a sort of folk etymology that sounds very logical but may not be correct? Thanks for your assistance.

A If it’s not just a silly joke, then it may be a folk etymology. But it’s more likely that the person who told you the story has got their facts backwards.

The reticule was indeed sometimes slangily called a ridicule during the early nineteenth century, but it was either an ignorant or a joking transformation of the older term. Charles Dickens used it in Oliver Twist in 1838: 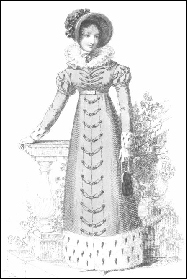 If my understanding of fashion history is correct (it’s hardly my field, I have to admit), the reticule was the forerunner of the modern woman’s handbag and so isn’t a fashion accessory as such but a necessary costume item. Not knowing she was to achieve eternal fame in the Oxford English Dictionary for putting the word down on paper for the first time, Catherine Wilmot explained it in a letter dated 13 December 1801 (the word is therefore nineteenth-century, not eighteenth). Reticules, she wrote, “are a species of little Workbag worn by the Ladies, containing snuff-boxes, Billet-doux, Purses, Handkerchiefs, Fans, Prayer-Books, Bon-Bons, Visiting tickets.” They were variable in appearance and materials, though their most common construction, especially early on, was a bag of loosely woven cloth or net, fastened by a drawstring.

This explains the name. Reticule comes from Latin reticulum, a diminutive of rete, a net, from which we also get such words as reticulation, a pattern or arrangement of interlacing lines that resembles a net (you may recall Samuel Johnson’s famous definition of network here: “any thing reticulated or decussated, at equal distances, with interstices between the intersections”).

It was a variation on the older term reticle, which survives (mainly in North America, I’m told) as an alternative for graticule, a network of lines such as the latitudes and longitudes on a map or crosshairs in the eyepiece of a device such as a telescope, for which reticule is also used.