Q From Barbara Murray, Wisconsin: Oxford Dictionaries online defines nimrod in UK English as a “skilful hunter” and, across the pond where I reside, as an “inept person”. Can you explain these more or less opposite meanings?

A Let’s start, as all good stories should, at the beginning. In the Bible, Nimrod was said to be the great-grandson of Noah. Genesis reports “And Cush begat Nimrod: he began to be a mighty one in the earth. He was a mighty hunter before the Lord.”

From the seventeenth century, Nimrod was conventionally used in literature on both sides of the Atlantic as the personification of a hunter, an eponym:

In front of him is the sporting Earl of Sefton, and that highly-esteemed son of Nimrod, Colonel Hilton Joliffe,— men of the strictest probity, and hence often appointed referees on matters in dispute.

The English Spy, by Bernard Blackmantle, 1825.

He was a complete Nimrod, now almost worn out.

In the UK, the name stayed largely a literary reference but even in that context it is now extremely rare. Several Royal Navy ships down the years have borne the name, as has a class of submarine-hunter aircraft. But we probably know it mostly as a piece of music much used on solemn state occasions. For geographical and social reasons it has never become a popular term in daily life for a hunter. When it did appear, it usually meant a rider to hounds:

The weather in the past few days has been so open, that the whole Nimrod school have had a fine run of enjoyment this season, except in cases where foxes are somewhat scarce.

In the US, with its longstanding and widespread tradition of hunting, much greater opportunities existed to describe individuals as Nimrods. It appears in sources such as newspapers from about the middle of the nineteenth century. At one time in the US it was also a moderately common given name in communities that went to the Bible for inspiration. 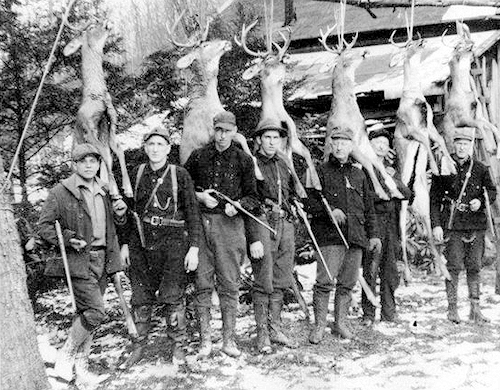 Early on, references were neutral in their implications, simply a figurative way to describe a person who hunted. Occasional descents into derision were prompted by a person falling short of competence, as in this tale about a group of young people out for a day’s sport:

Zindel was the mighty hunter of the crowd and after expostulations of his nimrod abilities the others watched him walk into a flock of a hundred quails and snap both triggers of his gun upon empty chambers.

Note that Nimrod here has lost his initial capital letter, sure evidence that the word was losing its mental links with an historical personage. This is the way that eponyms evolve — we no longer capitalise wellington, cardigan, pasteurise, diesel, silhouette, boycott or dozens of others of the same type.

From the 1930s onwards we see an increasing tendency for nimrod to be used much more in a disparaging or sarcastic way for a hunter with limited skills. Bugs Bunny, you may recall, referred to hunter Elmer Fudd as “poor little Nimrod”. Over time, nimrod shifted still further towards meaning a damn fool who shot at anything that moved and even things that didn’t. By the 1960s, this transition was pretty much complete:

In Wisconsin, as I was driving through, a hunter shot his own guide between the shoulder blades. The coroner questioning this nimrod asked, “Did you think he was a deer?”

Travels with Charley, by John Steinbeck, 1962.

and was being applied in particular to people who shot up road signs for fun:

The next stage seems to have been largely catalysed by students in the 1980s and 1990s, for whom nimrod had lost its associations with hunting but retained those of a contemptible or inept person. By the turn of the new century, that sense had become the dominant one:

When you’re followed, you can’t know if it’s an experienced expert or some bloody nimrod who can’t find his way to the loo.