Q From Ana Elisa Leiderman: Could you please tell me how the expression the real McCoy originated?

A Until recently, the origin of this common expression — meaning the real thing — has been unclear, which has opened the gates to admit an astonishingly wide range of suggestions, owing much to ingenuity but little to hard fact. Most of these argue that it was one of the myriad McCoys of America who was the real McCoy. Was it perhaps: 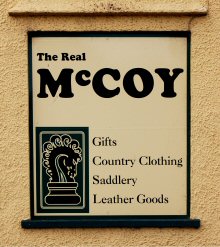 This one, in Porlock in Somerset, isn't a serious candidate!

There has been a fair measure of agreement among writers on word histories that this last one is the true origin. It is said that McCoy had so many imitators who took his name in boxing booths in small towns throughout the country that eventually he had to bill himself as Kid “The Real” McCoy, and the phrase stuck. In another anecdote a sceptical drunk who met the boxer in a bar denied he was the genuine article with such vehemence that McCoy was forced to hit him. After recovering the drunk said, “He’s the real McCoy!” These stories, I have to tell you, are apocryphal and there’s no evidence whatsoever for the imitators or the drunk.

There’s plenty of evidence, however, for suggesting that the original McCoy was actually a Mackay. The earliest example is from 1856, which is recorded in the Scottish National Dictionary: “A drappie [drop] o’ the real MacKay”. The same work says that in 1870 the slogan was adopted by Messrs G Mackay and Co, whisky distillers of Edinburgh. In the recently revised entry in the Oxford English Dictionary, all early examples mention strong drink and they’re all spelled McKay or Mackay. That includes the first figurative instance, which is a letter written by the author Robert Louis Stevenson in 1883: “He’s the real Mackay”.

Other examples also point towards a Scottish origin. A Rock in the Baltic, by Robert Barr, dated 1906, has: “I shouldn’t have taken the liberty of introducing him to you as Prince Lermontoff if he were not, as we say in Scotland, a real Mackay — the genuine article”. Many early appearances — the first dated 1865 — are from New Zealand, suggesting that it was taken there by Scots settlers. Conversely, it doesn't appear in print in the US before 1898, in either spelling.

It is clear from all this recently unearthed evidence that the term was originally the real Mackay, but became converted to the real McCoy in the US, either under the influence of Kid McCoy, or for some other reason.