Q From Dave Aton: For years, I was curious about the line ‘So I will take the Marley Bone Coach / And whistle down the wind’ in the song Whistle Down The Wind by Tom Waits. Later, I discovered that Marylebone was an area in central London. Then I found online: ‘I can’t grade papers because the campus mail’s web interface appears to have come a cropper, gone tits up, ridden the Marylebone Coach, and other unlikely things.’ So, apparently it’s a slang expression for dying, though I don’t know how common it is in England, nor its origin. Can you help?

A Many people have queried this line but to little useful effect. The other reference you quoted (which seems to be the only one of its kind online that's other than literal, according to Google, and of which my fairly wide-ranging literature search throws up no other example) is presumably an allusion to the song. There was no slang expression Marley Bone Coach or Marylebone Coach that I can find. There was, however, Marylebone stage, where stage refers to a stagecoach. Tom Waits may have had this in mind. Your asking the question gives me an opportunity to expatiate on this item of totally defunct British slang.

You’re right about Marylebone being an area of London, most famous for being the titular home of the Marylebone Cricket Club — better known by its initials MCC — formerly the governing body of English cricket. Marylebone is an abbreviation of its 14th century name, St Mary-by-the-Bourne, where the bourn is the Tyburn stream, which gave its name to the infamous gallows in the parish. By the way, Marylebone is said in several different ways by Londoners — the Longman Pronunciation Dictionary gives nine variations altogether — but if you start with a stressed first syllable and half swallow the rest of the vowels, you won’t go far wrong (/ˈmærələbən/ 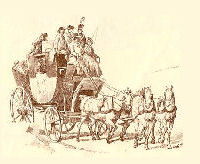 To go by Marylebone stage meant to go on foot. It appears in a novel by Mary Elizabeth Braddon called Charlotte’s Inheritance of 1868: “‘The cabmen are trying it on, anyhow, just now,’ thought Mr Sheldon; ‘but I don’t think they’ll try it on with me. And if they do, there’s the Marylebone stage. I’m not afraid of a five-mile walk.’” There was indeed a stagecoach which ran (staggered would be a better term — a contemporary writer said it “dragged tediously”) the four miles from Marylebone to the City of London, taking two and a half hours to get there and three hours to come back, this duration being partly accounted for by the extremely bad roads of the period but mainly by an unnecessarily long stop at an inn along the way. The earliest reference I can find to it is in a court case at the Old Bailey in 1822, in which a young man was found guilty of stealing two handkerchiefs from a passenger.

It was quicker to walk. This may have been part of the allusion, since Marylebone stage was either a joke based on, or perhaps a corruption of, marrowbone stage, known from the 1820s. John Black tells me that two centuries earlier Marylebone was often written as Marrowbone by Samuel Pepys among others; Pepys wrote in his Diary on 31 July 1667: “Then we abroad to Marrowbone, and there walked in the garden, the first time I ever was there, and a pretty place it is.” This makes the connection even easier to understand.

Marrowbone was a figurative term meaning the shinbones, hence the legs. So marrowbone stage has the same meaning as Shanks’s pony or Shanks’s mare. (There was also the obvious going by Walkers’ bus, which Dr Cobham Brewer mentions in early editions of his Dictionary of Phrase and Fable.) The first two expressions are equated in a book by George Augustus Sala with the title Twice Around the Clock, dated 1859: “The humbler conveyances known as ‘Shanks’s mare’, and the ‘Marrowbone stage’ — in more refined language, walking.”