Q From Tony McCoy O’Grady: The marching style known as goose-stepping came up in conversation recently and I was suddenly struck by the lack of connection between how a goose walks and how high the soldiers raise their legs, or the lack of knee-bending involved. Geese have backwards pointing knees and they bend when they walk. Can you shed any light on what connection with a goose gave rise to the expression?

A It wasn’t the original name of the step. By tradition, it was introduced into the Prussian army by Field Marshal Leopold, Prince of Dessau, around the middle of the eighteenth century. It was a way to keep the lines of Prussian infantry in step when approaching the enemy. It was called in German the Stechschritt or stabbing step. Germans couldn’t use the much older Gänsemarsch, literally “goose march” because this has always referred to people, particularly children, walking in single file, as goslings do behind mum. The name of goose step was given to the marching style in English and appears in the record at the beginning of the nineteenth century.

The English name was and still is pejorative, though in a curious lexical twist it has since been widely adopted in other armies (as in the early twentieth-century French pas de l’oie). In the 1930s, it became associated with the fascist dictatorships of Germany and Italy (in the latter country it was called the passo Romano or Roman step). 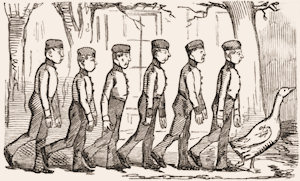 A Punch cartoon showing recruits goose-stepping. The accompanying caption read, “To this day the Goose Step is the first that must be taken by a recruit entering on a military career.” Note that the recruits’ legs are not straight!"

However, the English term wasn’t at first applied to the stiff-legged parade march but to a form of drill in which recruits were taught to stand alternately on one leg and swing the other back and forwards, keeping the knee straight. This is a rather later description of it:

Imagine him standing on the right leg, the other being raised so that the foot just clears the ground. Upon the word “Front” from the instructor of the drill, he advanced the raised foot to the front to an extent rather short of a pace, and there keeps it suspended till he hears the word “Forward.” He then places the suspended foot on the ground, and raises the other, keeping it off the ground in the rear, till at the further word “Tow,” he brings it up to the standing foot, though still keeping it off the ground. He is then in the position from which he started; and at the successive words, “Front,” “Forward,” “Tow,” each leg goes through the alternate standing and suspension required: and so on for as many hours as the drill is ordered to last.

This might have become known as the goose step because it made a soldier who was performing it look as silly as a goose (in the sense of a simpleton, goose is from the 1500s). It’s more likely that repeatedly standing on one leg reminded soldiers of the way a goose often stands.

The British Army never adopted the Prussian goose-step as a formal parade march, though it had something almost equally tiring, the slow march. The term goose-step was later transferred to the Prussian march because it resembled the British army drill in requiring the knee to be locked straight.