Q From Martin Turner, Hong Kong: A simple question, but it’s bothering me. Where does crib come from in the sense of a cheat’s answer sheet or illicitly copying somebody else’s work? It’s listed as the same word as the baby’s bed, but the connection is beyond me.

A It is the same word, though you may not be surprised to hear that a lot more lies behind it. The use of the term for a baby’s cot is more common in US English than in Britain, where it’s mainly reserved for a model of the Nativity of Christ, with a manger as a bed. The verb to crib in the sense of plagiarism or stealing another’s schoolwork is mainly British English, though both US and British English know crib notes. Both varieties of English share the sense of a barred container or rack for animal fodder, a manger. This is the original, which turns up in English around the year 1000 and which is from an Old German word whose descendants are to be found in modern Dutch and German. 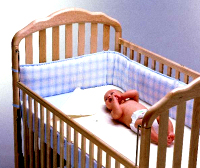 One sense of crib.

There are other senses of crib, especially that of a small house, cabin or hovel (from an extension of the sense of an animal stall), which eventually led to the meaning in the South Island of New Zealand of a small house at the seaside or at a holiday resort, to thieves’ slang of the early nineteenth century for a house, shop or public-house and to the slightly later US slang usage for a saloon, a low dive, or brothel (and also the current US Black English sense of one’s room, house or apartment). The baby’s bed doesn’t arrive until the seventeenth century as an application of the barred container idea, others from the same source being a repository for hops during harvest and a wickerwork basket or pannier. A shift from container to contents may explain why it has sometimes meant a light meal or a workman’s lunch, though it’s also suggested that an eighteenth-century slang sense of the stomach may be the direct link.

The basket sense was used in particular for one in which a poacher might conceal his catch. The experts guess this may have led to the thievery sense around the middle of the eighteenth century. Much rests on an appearance in Samuel Foote’s play The Nabob of 1778: “A brace of birds and a hare, that I cribbed this morning out of a basket of game.” The plagiarism sense arrived at around the same time, though it seems to have become applied to stealing another’s school work only in the following century.