Q From Charlotte George, Germany: I was engaging in cruciverbals the other day when I came across a clue in a puzzle by Logodaedalus in one of The Guardian’s Cryptic Crosswords books: “Breakdown of beer celebration (punch line!)”. The solution is collapse of stout party. Having managed to solve it, I was still somewhat puzzled, as this particular juxtaposition of words means diddly-squat. I am still in the dark whether punch refers to the magazine, or to Judy’s bitter half, and whether stout is the ale that’s exemplified by Guinness, or just a dysphemism for ventrally challenged. Could you possibly expound this recondite matter?

A I suspect your question may be more linguistically entertaining than my answer, but let’s give it a go.

The expression collapse of stout party is British. It is said to be the punchline of a certain kind of ponderous and verbose joke that’s characteristic of the nineteenth century. It signals that the victim has realised he has been bested and is wilting in embarrassment and chagrin.

Party means a person, a sense also of the nineteenth century. It was borrowed from the term for one side of a legal argument but here means merely the individual in question; stout certainly does mean fat (it’s not the figurative sense of determined and brave that appears in idioms such as stout fellow). The two together, as stout party, could be a humorous reference to a fat person in the nineteenth century. Having a pompous fat man as the butt of a joke increases the humour and provokes the mental image of his being deflated like a balloon being pricked. Hence collapse.

It has been widely assumed by observers and even by the editors of the humorous magazine Punch that the term appeared in some of the long-winded and lumbering jokes that captioned cartoons in that magazine during its heyday (incidentally, this sense of cartoon, for a humorously exaggerated drawing, was invented by Punch in 1843 as an extension to the older idea of a preparatory design for a painting). This is a fairly typical example of such a joke, from the issue of Punch for 11 September 1901; it even includes a stout party, though not the expression: 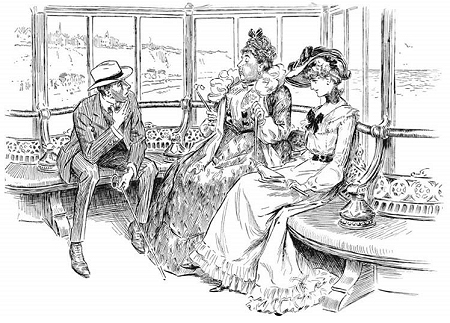 PUTTING THE OTHER FOOT IN IT
Mother: “Ethel is the very image of what I was at her age.”
He: “Really! I shouldn’t have thought it possible!”
Mother (coldly): “May I ask why?”
He (seeing his error, and striving to rectify it): “Oh — er — I was
forgetting what a long time ago that must have been!”

You quoted this in your original question:

To many people Victorian wit and humour is summed up by Punch, when every joke is supposed to end with “Collapse of Stout Party”, though this phrase tends to be as elusive as “Elementary, my dear Watson” in the Sherlock Holmes sagas.

Collapse of Stout Party, by Ronald Pearsall, 1975. He investigated many types of nineteenth-century humour and wrote of Punch that “it was strong on weak puns”.

Like Mr Pearsall, the editors of the Oxford English Dictionary (who include an entry for the phrase) have not been able to find it in any nineteenth-century issue of Punch magazine, nor indeed from the nineteenth century at all (their first example is from 1957 in a history of Punch). The Oxford Dictionary of Quotations, in similar vein, notes, “the phrase is supposed to come from Punch, as the characteristic finishing line of a joke, but no actual example has been traced, although the character Stout Party appeared in a cartoon of 1855”. The consensus ruins the crossword clue.

My enquiries suggest that it became a popular catchphrase only after the Second World War. The earliest example in print I can find is in Denis Johnston’s account of his experiences as a BBC war correspondent, Nine Rivers From Jordan, published in 1953. However, Dave Barton tells me that he has found it in a letter written by his father, Ronald Barton, in July 1946: “Watts has just phoned to say I have done a ‘superb job.’ Collapse of stout party.” As Ronald Barton had been in the RAF during the War, his usage and that of Denis Johnston may suggest it developed as wartime services slang. Rather later, a stage play by Trevor Peacock with the title Collapse of Stout Party appeared in 1966 and a book of the same title by Sir Julian Critchley, detailing the near-demise of the Conservative Party following the 1997 election, came out in 1998.

Why it should have become popular so long after the period to which it nominally refers is a bit of a puzzle. I can only assume that some wit invented it and attributed it to Punch to give it a patina of historical verisimilitude, perhaps with memories of having seen stout party. The first explicit link with Punch that I can find is in an account in the New York Times in 1955 of a London meeting chaired by Malcolm Muggeridge, then the editor of Punch.

All in all, an unsatisfactory state of affairs, etymology-wise.