Q From David Gullen: I know what cock-a-hoop means but not why! Do you have any ideas?

A You’re going to be a little disappointed. Many have speculated down the years on the origin of this puzzling expression for being very obviously pleased about some success — mainly known in Britain and Commonwealth countries — but have failed to arrive at any very satisfying conclusion, or at least to none that can be unequivocally substantiated.

One source of confusion is caused by a folk etymological spelling as cock-a-whoop. Like that, it suggests a crowing rooster in full triumphant cry, a neat image of its meaning. No doubt it was that process of thought that led to the spelling, together with puzzlement about the meaning of hoop. It’s not new — it’s written that way in the 1811 edition of Francis Grose’s Dictionary of the Vulgar Tongue as well as in many more recent works, including The Lord of the Rings: “Swagger it, swagger it, my little cock-a-whoop.” Some writers have argued that it was the original form, but the evidence I’ll come to in a moment rules it out. 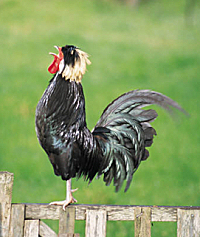 You can quieten down,
it’s nothing to do with you

The editors of the Oxford English Dictionary say of cock-a-hoop that it is a phrase “of doubtful origin, the history of which has been further obscured by subsequent attempts, explicit or implicit, to analyse it.” They then spend 400 words explaining why these various attempts are spurious. It’s impossible to improve on that quality of scholarship, but at least I can give the background.

We may be shaky on its origin, but we can say quite a lot about the way in which the expression has evolved. It started out meaning to drink and make merry with utter abandon, “to make good cheer with reckless prodigality”, as the OED’s editors wrote with linguistic exuberance. Over time — the expression is recorded from the middle of the sixteenth century — it evolved into meaning reckless or elated and hence arrived at its modern meaning.

The problem for word historians is that they’re unsure what the cock bit refers to. Was it really a cockerel or rooster? It doesn’t work for the oldest sense, though some writers long ago suggested that hoop here is actually from French huppe, a tufted crest, in reference to the cockerel’s comb.

The first recorded guess (and we really have to call it that, even though it was put into print in 1670, more than 300 years nearer its origin) was by Thomas Blount, who suggested that the cock was referring to a spigot, so it was being used in the same way that it now appears in stopcock. Intriguingly, experts are sure this is the same word as the one for the bird, not least because the German equivalent, Hahn, has for much the same period of time had both meanings. The link might have come about because early examples looked like a cock’s head with its comb. If the cock is the tap of a cask, then the hoop might be one of those enwrapping the vessel. Blount suggests that when people intended to seriously make merry, they took the cock out of the cask and laid it on one of its hoops, signalling that those present should drink unceasingly. As the first form of the expression was cock-on-hoop, this argument is plausible on etymological grounds.

We have to leave it there. There’s little chance of finding further evidence to make the origin clearer or otherwise of seeing clearly through the mists of time. Let’s enjoy it as an unsolved puzzle.