Q From Jane Cawthorne: Do you know the origin of the phrase Case the joint, as in “He had to case the joint before the robbery”?

A To get to the bottom of this one, we have to split the expression into two. Joint here is the well-known American term for a place, especially a bar or club. It comes from joint in an old slang meaning of an illicit association or partnership, a joint endeavour, and then of a place where criminals gathered. Its first American sense, in the 1880s, was of an opium den but it spread to refer to an illegal saloon, a brothel, gambling den, or even a poor restaurant. Later it became a term for prison. Even in today’s looser sense of some unspecified place or undertaking, joint retains a raffish or disreputable undercurrent. (Its sense of a marijuana cigarette is said to have been an independent creation, but one has to wonder in view of its early application to an opium pipe.)

Case is a more difficult term to pin down because noun and verb have so many senses. The experts point to the gambling game called faro, hugely popular in North America in the nineteenth century, to the extent that for a while it almost became a national game. Its name is a simplified form of pharaon (English pharaoh), a French game of the century before. Various writers have argued that it gave American English numerous idioms, some now defunct, which include calling the turn, coppering the bet, from soda to hock, and play both ends against the middle. Faro was also called bucking the tiger, for unknown reasons, a term also applied to roulette and to heavy gambling of any sort.

Faro was easy to learn and offered good odds because the percentage of bets taken by the operator was especially low, between two and three percent. Honest operators of faro games found it hard to make a living and cheating became rife:

One Faro lay-out, with rosewood case-keeper; first-class, with painted cards on both lay-out and case-keeper. Cost $100, for $25. 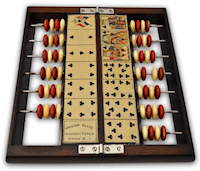 A good-quality case-keeper, similar to the one being advertised

This mentions two of the key pieces of equipment required for Faro, the third being a dealing box from which cards from a single pack were dealt one at a time. The layout was a sheet or board set with the images of the thirteen cards from one suit, on which the players placed their bets. A case-keeper was a device rather like an abacus, which kept a record of the play, in part so players could avoid betting on cards that had already been played, but also to try to ensure fair play. At various times it was known instead as the cue box, cue keeper or case keep, which was kept up to date by an assistant who was usually, if confusingly, also called the case-keeper.

Its records became increasingly important as the game progressed and the number of cards remaining in the dealing box fell. Experienced players kept a close watch on it to maximise their chance of winning and to minimise the risk that a crooked dealer and case keeper were working in cahoots (in slang, operating a brace game, as it needed a pair of rogues). This is said to have given rise in the 1880s to the idiom to keep cases, to watch something closely. The players often kept their own records of play on cue cards and this was also called keeping cases.

An early example appeared in a tale about a frontier funeral that made humorous use of contemporary gambling terminology:

Jack Richards was keeping cases, and he proposed three cheers for the stiff; and you double your gamble he got ‘em.

Sometime later this sense of case as a noun evolved into the verb to case, to watch or inspect. The earliest example we know of is in a slang dictionary of 1914, but by then it had probably been in use in the criminal community for many years. The special form case the joint is very appropriately first recorded in a police report:

No one would suspect that the well-dressed young man who had made a purchase just at closing time prior to the burglary was “casing the joint”.

However, it became widely known only from the late 1930s, in books and films about American gangsters and tough detectives.