Q From Taiwo Obe: Here in Nigeria, it is said that the true state of the health of the president has been shielded from Nigerians by a cabal, who are bent on holding on to power. How did the word come about?

A This term for a semi-secret political clique is sometimes said to be an acronym, from the initials of five leading members of Charles II’s government of 1667-73 that covered the period of the third Anglo-Dutch war. The five members were Sir Thomas Clifford, Henry Bennet (Lord Arlington), George Villiers (the Duke of Buckingham), Anthony Ashley Cooper (Earl of Shaftesbury) and John Maitland (Earl of Lauderdale). Clifford, Arlington, Buckingham, Ashley and Lauderdale — CABAL. 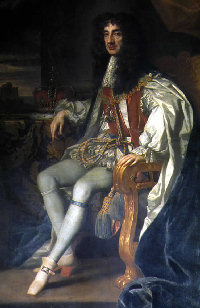 This king had a cabal

Even without detailed knowledge of word history this should cause your mental eyebrows to rise in scepticism. The earliest known acronyms date from around the time of the First World War (the military slang AWOL, “Absent Without Leave”, is among the earliest, which newspaper reports around 1918 demonstrate was being said as a pronounceable word) and yet the source of cabal is dated on this theory to an acronymic origin some 250 years earlier.

What scuppers the idea is that cabal is known from earlier in the seventeenth century through usages linked to Charles I and Oliver Cromwell. It came into English via French cabale from medieval Latin cabbala (these days more usually Kabbalah). This is an esoteric secret Jewish system of mystical practices based on a study of the Torah, the first five books of the Old Testament. Kabbalistic teaching was based on oral transmission from a personal guide, so cabal, at first referring directly to the Kabbalah, came to mean a private or semi-secret interpretation. By the middle of the seventeenth century it had developed further to mean some intrigue entered into by a small group and also referred to the group of people so involved.

The word was indeed applied to the five ministers (in a pamphlet issued in 1673), but it was no more than a scurrilous joke based on the accident of their initials. Unfortunately, it’s a joke that has long since gone sour on etymologists, who have to keep explaining the facts, a problem compounded by historians, who continue to refer to the Cabal Ministry as a convenient shorthand.