By hook or by crook

Q From Alice Winsome: I know that by hook or by crook means to do something by any means possible, but why those two words? What’s the story behind it?

A This curious phrase has bothered many people down the years, the result being a succession of well-meant stories, often fervently argued, that don’t stand up for a moment on careful examination.

As good a place to start as any is the lighthouse at the tip of the Hook peninsula in south-eastern Ireland, said to be the world’s oldest working lighthouse. It is at the east side of the entrance to Waterford harbour, on the other side of which is a village and parish called Crook. One tale claims that Oliver Cromwell proposed to invade Ireland during the English Civil War by way of Waterford and that he asserted he would land there “by Hook or by Crook”. In another version the invasion of Ireland was the one of 1172 by Richard de Clare, 2nd Earl of Pembroke, also known as Strongbow.

Two other stories associate the phrase with gentlemen called Hook and Crook. Both appeared in early issues of the scholarly research publication Notes and Queries. One linked it with the difficulties of establishing the exact locations of plots of land after the great fire of London in 1666. The anonymous writer explained:

The surveyors appointed to determine the rights of the various claimants were Mr. Hook and Mr. Crook, who by the justice of their decisions gave general satisfaction to the interested parties, and by their speedy determination of the different claims, permitted the rebuilding of the city to proceed without the least delay. Hence arose the saying above quoted, usually applied to the extrication of persons or things from a difficulty. The above anecdote was told the other evening by an old citizen upwards of eighty, by no means of an imaginative temperament.

The other supposed derivation was equally poorly substantiated:

I have met with it somewhere, but have lost my note, that Hooke and Crooke were two judges, who in their day decided most unconscientiously whenever the interests of the crown were affected, and it used to be said that the king could get anything by Hooke or by Crooke.

Most of these stories can be readily dismissed by looking at the linguistic evidence, which tells us that the expression is on record from the end of the fourteenth century, by which time it was already a set phrase with the current meaning.

During this period, local people sometimes had rights by charter or custom known as fire-bote to gather firewood from local woodlands. It was acceptable to take dead wood from the ground or to pull down dead branches. The latter action was carried out either with a hook or a crook, the latter implement being a tool like a shepherd’s crook or perhaps just a crooked branch.

Little contemporary evidence exists for this practice. Written claims for it dating from the seventeenth century are said to exist for the New Forest in southern England, one of which argued for an immemorial right to go into the king’s wood to take the dead branches off the trees “with a cart, a horse, a hook and a crook, and a sail cloth” (it’s not stated why the sail cloth was needed). Another version was once claimed to be in the records of Bodmin in Cornwall, whereby locals were permitted by a local prior “to bear and carry away on their backs, and in no other way, the lop, crop, hook, crook, and bagwood in the prior’s wood of Dunmeer.” Richard Polwhele’s Civil and Military History of Cornwall of 1806 argued in support of this claim that images of the hook and the crook were carved on the medieval Prior’s Cross in nearby Washaway, though modern writings describe them as fleurs-de-lys.

The examples suggest that this origin for the expression is the correct one, though some doubt must remain. 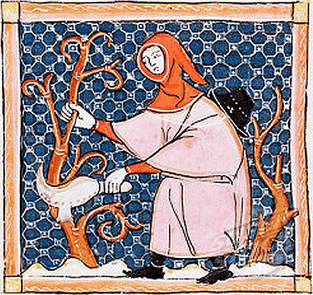 This medieval illustration shows a billhook, but the worker is pruning a tree, not cutting firewood.

The hook of the idiom may have been just a bit of wood or metal but might equally have been a tool with a sharpened edge, allied to the billhook or reap hook of more modern agricultural practice. We now connect crook principally with shepherds and bishops, but in medieval times it was any hooked device or implement. This meant that hook and crook were synonyms as well as rhymes, which made it almost inevitable that they were put together to make a reduplicated rhyming phrase.