Q From Dean O’Kelley; related messages came from Karen Indermuehle, Linda Lindenfelser, Nicholas Brandes and Dave Cotton: One of the guys in my office sat down at his desk and commented, ‘Time to get down to brass tacks this morning, boys.’ Of course, I immediately rushed to your site to look it up and since it wasn’t there, I’m askin’.

The meaning of to get down to brass tacks is clear enough: to concern oneself with the key issues of some matter or to focus on the immediate business at hand. You sometimes see this online as brass tax, an error that may have come about because there’s no very obvious image on which to hang the expression.

Its origin is not altogether certain, though we do know that it’s American. The first examples appear in newspapers in the 1860s and early 1870s. The first I know of is dated 1863, from The Tri-Weekly Telegraph of Houston, Texas: “When you come down to ‘brass tacks’ — if we may be allowed the expression — everybody is governed by selfishness.” That was unearthed by Fred Shapiro of the American Dialect Society. Barry Popik, from the same society, found another instance, of January 1867, in the Daily Whig & Courier of Bangor, Maine: “The Galveston Bulletin says that Texas must ‘come down to brass tacks’ and accept the constitutional amendment, unless the people wish Congress to proceed with reconstruction.” I’ve since found further examples from the early 1870s, all of them from the Galveston Daily News of Texas. Might brass tacks be a Texanism? It seems likely. 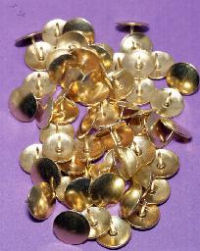 Until recently, the lack of early evidence — all the examples above have been found in the past year or so — didn’t make it clear what country it came from or anything about it. This has led to a set of more or less fanciful stories. It has been said that it refers to cleaning the hull of a wooden ship, scraping off weed and barnacles until the bolts that held its hull together (the brass tacks of the expression) were exposed. Others point to the brass tacks commonly used in upholstery because they won’t rust and stain the fabric; to reupholster a chair would require the craftsman to get down to the brass tacks. The schoolboy prank of putting tacks on chair seats to puncture the pride of the unwary has been suggested as its genesis. However, much the most common story — the one most widely believed — says that it’s Cockney rhyming slang for facts (tacks and facts rhyme in Cockney speech).

We can dismiss most of these for good reasons. The expression has no known connection with the sea and hull fastenings were always of copper, not brass. Though brass tacks were used in furnishings, the association with the phrase seems more than a little stretched. The suggestion of a Cockney origin was put forward by Eric Partridge and supported by Jonathon Green, but as the idiom is certainly American in origin, it seems unlikely.

The chair-seat practical joke has something going for it, in that it’s directly relevant to the “get down to” part of the saying and might refer to the painful duty of facing facts and getting on with the job. But there’s no contemporary evidence and somehow I can’t see a childish practical joke leading to a term used by adults.

Yet another idea is that it refers to the brass nails or tacks set into the counter of a hardware store or draper’s shop a yard apart to measure lengths of material. The idea here is that measurements were often casually made by the almost immemorial method of using the distance between the nose and the tip of the outstretched hand as a yard. As this was imprecise, to request an exact measurement using the brass tacks on the counter would be to focus on the true facts of the matter. We can’t be sure about this, but the homely analogy is seductive. The use of brass markers in this way long predates the earliest appearance of the idiom, though it was more common in the earlier nineteenth century to describe them as brass nails rather than brass tacks, the latter term only becoming common later in the century. But brass tacks was certainly used in this sense. For example, this appeared in Scribners Monthly in August 1880: “I hurried over to Seabright’s. There was a little square counter, heaped with calicoes and other gear, except a small space clear for measuring, with the yards tacked off with brass tacks.”

As you will gather, I prefer this explanation.