Q From Burt Rubin; a related question came from Keith Denham: As an American, I’ve always wondered about the origin of the term Boxing Day.

A Boxing Day is a public holiday in Britain and most Commonwealth countries. There’s some minor confusion these days, in Britain at least, over which day it actually is. The reference books a century ago were adamant that it was the first working day after Christmas Day. However, the name is now frequently attached specifically to 26 December, even if it falls at the weekend, which makes it equivalent to the Christian saint’s day of St Stephen.

We have to go back to the early seventeenth century to find the basis for the name. The term Christmas box appeared about then for an earthenware box, something like a piggy bank, which apprentices and other workers took around immediately after Christmas to collect money. When the round was complete, the box was broken and the money distributed among the company. The first known example:

Tirelire, a Christmas box; a box having a cleft on the lid, or in the side, for money to enter it; used in France by begging Fryers, and here by Butlers, and Prentices, etc.

A Dictionarie of the French and English Tongues, by Randle Cotgrave, 1611.

By the eighteenth century, Christmas box had become a figurative term for any seasonal gratuity. By the nineteenth century their collection seems to have become a scourge in our big cities. When James Murray compiled an entry for Christmas box in the first edition of the Oxford English Dictionary in 1889, his splendidly acerbic description suggests that the practice had become a personal bugbear:

A present or gratuity given at Christmas: in Great Britain, usually confined to gratuities given to those who are supposed to have a vague claim upon the donor for services rendered to him as one of the general public by whom they are employed and paid, or as a customer of their legal employer; the undefined theory being that as they have done offices for this person, for which he has not directly paid them, some direct acknowledgement is becoming at Christmas. 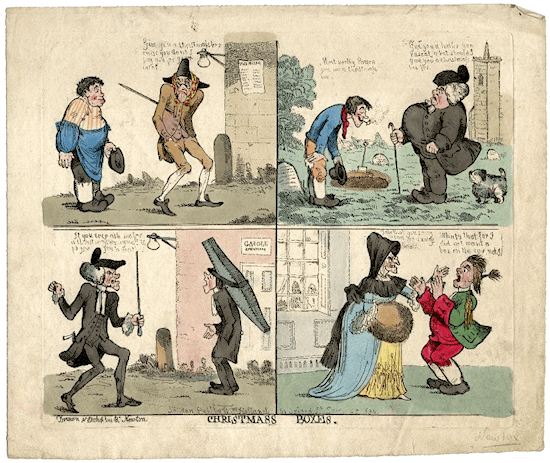 These panels satirise the grudging response of moneyed individuals on being asked for a seasonal gratuity. Drawing by Richard Newton, first published on 25th December 1795.

Though the term Boxing Day for the day on which such Christmas boxes were requested didn’t become widespread until early in the nineteenth century, a few examples are recorded from the previous century. The earliest I know of is this:

Tuesday in Christmas Week, about Eight in the Evening, I was coming over this broad Place, and saw a Man come up to this lame Man, and knock him down — It was the Day after Boxing Day.

By the middle of the nineteenth century, the term seems to have become as closely associated with importuning individuals as Christmas Box itself:

“Boxing Day,” — the day consecrated to baksheesh, when nobody, it would almost seem, is too proud to beg, and when everybody who does not beg is expected to play the almoner. “Tie up the knocker — say you’re sick, you are dead,” is the best advice perhaps that could be given in such cases to any man who has a street-door and a knocker upon it.

The custom has died out, seasonal visitors to Britain may be assured, though small gifts are still sometimes given to tradesmen and suppliers of services. The favourite occupation of the day is attending football matches or rushing to the post-Christmas sales.