Q From Dennis List: I was reading Henry Green’s novel Loving, first published in 1945. I was surprised to find that one character mentioned the blower. I’d have expected that slang term to be much more recent. Then I began to wonder why it’s called a blower. What actually blows?

A As a British slang term for the telephone, it’s actually a good deal older than that book. The Oxford English Dictionary’s first example is from 1922. My suspicion is that it’s even earlier, though. 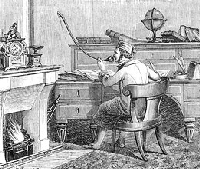 That’s because the slang term comes from a mechanical precursor to the telephone, the speaking tube, each end of which was stoppered with a whistle. In order to attract the attention of the person at the other end, you took out your stopper and blew down the tube to make the other whistle sound.

There is one small caveat. The very first usage noted in the OED is from Edgar Wallace’s story Flying Fifty-Five: “The club enjoyed a ‘blower service’. The ‘blower’ is difficult for the outsider to understand.” This presumably wasn’t a speaking-tube device but an announcement service from a racecourse of the kind well known to frequenters of betting shops. This would seem to be a transferred sense of blower from an earlier, unrecorded, usage.