Q From Jim Mitchell: As a child in South London, when I came in from playing and was a bit grubby my mother would say I looked as black as nookers nocker. My mother was born in 1917. I wonder if she might have heard this expression from her mother?

A It’s very probable. But not perhaps in that form. Your mother’s version is a mishearing of a Londoners’ expression that dates back in written records to 1881: black as Newgate knocker. It has also turned up in the forms black as Newker’s knocker, black as Nook’s knocker and black as Nugent’s knocker.

Curiously, though it has been in existence for more than a century and is currently not widely known, in writing it is now more often found than it has ever been, perhaps because it’s such an evocative item of historical Cockney slang. These days it almost always has an added apostrophe-s:

Her eyes really are black as Newgate’s knocker.

Newgate here refers to the notorious prison, originally created in medieval times in one of the turrets of Newgate, a main entrance through the walls into the City of London. Down the centuries the prison was rebuilt five times; it closed in 1902 and was demolished in 1904. The Central Criminal Court, better known as the Old Bailey, now stands on the site. 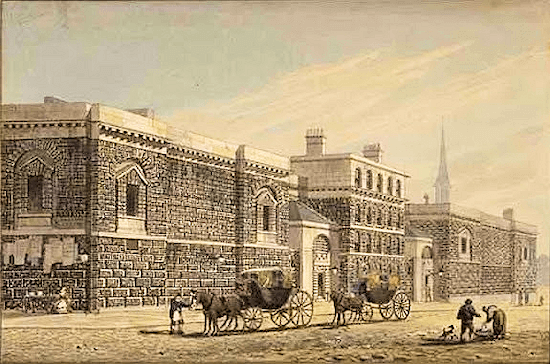 Newgate was a place of fear and loathing to many Londoners, not only criminals but also debtors, who were imprisoned there until they found a way to repay what they owed. After 1783, it was also the place where executions took place, initially on a public platform in front of the building, later inside. For most of its existence it was a noisome, dank, dark and unhealthy place to be incarcerated.

It’s not surprising that it should have been commemorated in expressions. But why not just black as Newgate? Why should its door knocker be selected as the source of the simile?

The phrase Newgate knocker itself is older. It was applied to a hairstyle fashionable among lower-class male Londoners such as costermongers. Though it became widely known from the 1840s, I’ve found a reference to it in the Kentish Gazette in 1781. It referred to a lock of hair twisted from the temple on each side of the head back towards the ear in the shape of a figure 6.

In 1851, Henry Mayhew wrote in his London Labour and the London Poor that a lad of about fourteen had told him that to be “flash” (stylish) hair “ought to be long in front, and done in ‘figure-six’ curls, or twisted back to the ear ‘Newgate knocker style’.” Eight years later, John Camden Hotten explained in his Dictionary of Modern Slang, Cant, and Vulgar Words that “The shape is supposed to resemble the knocker on the prisoners’ door at Newgate — a resemblance that carries a rather unpleasant suggestion to the wearer.” Another description came a couple of years later from another investigative social journalist, James Greenwood:

All, or nearly all, [were] bull-necked, heavy-jawed, and with the hair dressed after a fashion known among its patrons as the “Newgate knocker” style — that is, parted in masses on each side of the head and turned under unnaturally.

There’s no obvious connection with the colour black. We may guess, however, that Londoners would have imagined the prison’s knocker to be large and made of black iron as well as figuratively black because of its evil associations. We may also guess from the dates at which the two expressions were first current that Londoners took over the hairstyle phrase as a new way to describe the colour, as people have done for centuries with similes such as black as your hat, black as death, black as the ace of spades, black as thunder, and black as the Earl of Hell’s waistcoat.

As a postscript, I also found this, in a story from 60-odd years ago about the search by a journalist named Bernard O’Donnell for the original Newgate knocker:

His spasmodic search came to an end recently when he was in the office of the Keeper of the Old Bailey, Mr A W Burt. “Where is Newgate’s knocker?” he asked Mr Burt. Promptly it was shown to him. It was on the keeper’s desk. After years spent as a symbol which came to inspire dread among the poor of London, it had found a more useful rôle. It now makes an ideal paper weight. 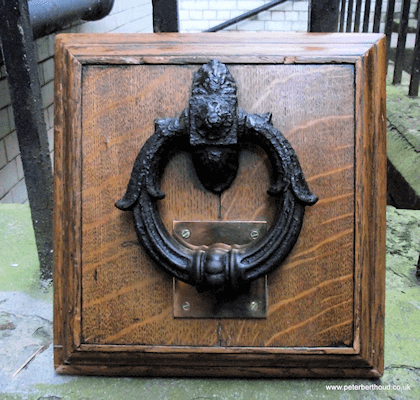 That sent me on a search. I now know, thanks to Steven K Humpleby of the Central Criminal Court, that the original Newgate knocker is used as a gavel at dinners held in the Lord Mayor’s and Sheriffs’ Dining Room at the Court to bring the assembled guests to order before toasts and speeches. The London tourist guide Peter Berthoud kindly supplied me with the accompanying photograph, which he took in Dead Man’s Walk by the Court because there was more light there. Mr Humpleby explained that it’s mounted on a block of wood from the original Newgate Prison. When not in use as a gavel, it’s on display in the Judges Dining room in the Court, but alas not to the public.

My thanks go also to Vyki Sparkes of the Museum of London for her help.