Q From Graham Rooth, UK; Michael Drake, New Zealand: The phrase basket case is quite commonly used to describe failing economies nowadays. I think it would originally have been applied to describe dysfunctional individuals. Any thoughts on its origins?

A You’re partly right, though the nature of the dysfunction was much more severe than you might be thinking. The term started to appear quite suddenly in American newspapers at the end of March 1919.

The press was reporting an official denial of rumours that were circulating widely among ex-servicemen back from the First World War. They claimed that some soldiers had been so seriously injured that they had lost both arms and both legs and were left as living heads and torsos who could only be transported in a basket:

Maj Gen Ireland, Surgeon General of the army, said today there was no foundation for widely circulated and persistent reports of basket cases in army hospitals. A basket case is a soldier who has lost both legs and both arms, and therefore cannot be carried on a stretcher. “I have personally examined the records,” said Gen Ireland, “and am able to say there is not a single basket case either on this side of the water nor among the soldiers of the American Expeditionary Forces. Further, I wish to emphasize that there has been no instance of an American soldier so wounded during the whole period of the war.”

The term echoed a standard usage of the time. A literal basket case was a hamper, a woven container for dry goods. The new sense played on case in the medical sense of an instance of disease or injury.

The term almost completely vanished in the inter-war years but in 1939 the concept became the focus of a harrowing anti-war novel by Dalton Trumbo, Johnny Got His Gun, about a First World War veteran, Joe Bonham, who was blown up and lost not only his limbs but also his face and who was denied the right to die. It was made into a film in 1971. The book doesn’t use basket case but it does describe Joe Bonham being transported in a wicker basket. 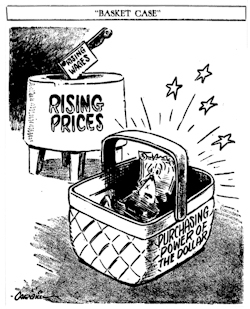 Rumours that there were many examples of such casualties similarly circulated among US forces in the Second World War — particularly a widely syndicated report of December 1943 that stated, “The real candidate for Time mag’s ‘Man of the Year’ should be the 21-year-old basket case in the Army’s Percy Jones Hospital at Battle Creek, Michigan” — and brought a similar denial from the Surgeon General of the time, Major General Norman T Kirk, who said in April 1944 that “There is nothing to rumors of so-called ‘basket cases’.” Time magazine noted in August 1945, however, that the Army man in Percy Jones Hospital existed and named him as Master Sergeant Frederic Hensel, who went on post-war to become a chicken farmer with the help of donations from the public. In May 1950, the same magazine noted that US Army pilot Jimmy Wilson was the other quadruple amputee of the war.

The senses of a person regarded as useless or unable to cope, specifically as the result of mental illness, and of a country that is unable to pay its debts or to feed its people came along shortly after the war. The first I’ve found is the title of a syndicated cartoon in January 1946 (above from the Hamilton Daily News Journal), commenting on the decline in value of the dollar. Both senses have continued to be widely known and used and have spread worldwide.

Britain is an economic basket case, while Scotland, with its government’s quixotic obsession with windmills, is even worse.