Marc Picard introduced me to a new grammatical term. “Adverbs like wrong, sure, fast, slow, etc. actually have a name, as I discovered recently when one of my students did a paper on this phenomenon in a course I was giving on the history of English. They’re called flat adverbs, presumably on the basis of phrases like ‘to fall flat’ or ‘to turn down flat’.” The Oxford English Dictionary includes flat adverb as first being used by the philologist John Earle in his work The Philology of the English Tongue of 1871, though it doesn’t explain why he chose it.

A perspective on all such intricacies of English was supplied by Vivien Allen: “As a teacher of English as a foreign language before I retired I always read your weekly magazine with great interest. Today I was reminded of a class at a language school in Cambridge where I taught at one time. I had been taking my students through the various pronunciations of -ough and had put a list of words such as bough, tough and through on the blackboard. At the end a German boy sighed deeply and said, ‘Mrs Allen, You don’t know how lucky you are being born speaking English’! On another occasion I congratulated a Dutch student on his excellent English and commented that the Dutch students always arrived well grounded in the language. He replied, ‘If you are born speaking a language that sounds like swearing in hiccups you have to be good at English’!”

On the edge Several readers provided a further illustration of the worrisome difficulties of English. They noted that in this section last time I wrote, “Two comments suggest that I sounded the death knell on Great Wen too precipitately”. They firmly told me that the word should have been precipitously. Having written one long piece last week to justify my choice of adverb, I’m disinclined to impose another on long-suffering subscribers: the complicated story of the ways in which the two words have interacted in meaning and usage would need a substantial and probably boring article. However, I’m surprised at the comments, since all the dictionaries that I’ve consulted give as their first sense of precipitate phrases such as “sudden, hasty, rash” or “done without careful consideration”, They also give one sense of precipitous as “hasty or precipitate”. Jeff Kabacinski lightened his gentle criticism by ending his message, “though it does bring to mind that old chemistry joke, ‘If you’re not a part of the solution, you’re a part of the precipitate’.”

A new subscriber from Australia told me he had come across the site through trying to solve a crossword clue in The Age, “1000-ampere rain shedders”. He didn’t get any help from the site, because I’d never written about gamps, but he solved the clue anyway. (Was the compiler thinking of a thousand US dollars, a g-note? I’d normally take the prefix g to mean giga-, a thousand million.)

A gamp is indeed a rain shedder, more prosaically an umbrella, one particularly suited to this apology for a summer we’re currently having in Britain. But we Brits are inured to rain. As The Times commented in April 2011, “When the clouds open we will bring out brollies, beach parasols, golf umbrellas, gamps, sou’westers, oil-skins, gaberdines and rain-ponchos.” 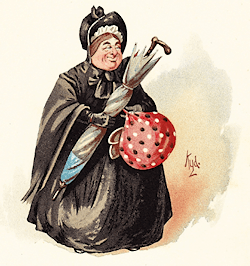 This image of Mrs Gamp, with large bonnet and unruly umbrella, was created by Kyd, real name Joseph Clayton Clarke.

Brolly is, all the best authorities assure us, a clipped and altered form of umbrella, supposedly beginning its life as university slang at Oxford and Cambridge in the 1870s (it’s also sometimes known as a brelly, which makes a little more sense). But gamp had preceded it into the printed record for what a writer described in 1864 as “a large, bulgy, loosely tied cotton umbrella”.

We are once again indebted to the fertile mind of Charles Dickens. Mrs Sarah (Sairey) Gamp appeared in his novel Martin Chuzzlewit in 1846. She had a large umbrella, “in colour like a faded leaf, except where a circular patch of a lively blue had been dexterously let in at the top”, which entered into so many adventures during the course of the story that it almost become a character in its own right.

Mrs Gamp, a disreputable drink-sodden widow, first appears when she is engaged as a night watcher to sit up with the body of Anthony Chuzzlewit during the week before his funeral; she claimed also to be a midwife, though she was really what was then called a monthly nurse, one who stayed with and looked after women for that period after childbirth. (The modern equivalent is sometimes called a doula, from the classical Greek word meaning a female slave.)

Gamp is not now much used, even in the country of its birth, but it’s still in the dictionaries and it’s well enough remembered that a crossword setter in Australia could base a clue on it and expect it to be solved.

Not lost but refashioned Tony Chabot wrote that he came across this sentence in a seventeenth-century letter from Sir Isaac Newton to Robert Hooke: “I have long grutched the time spent ...”. He feels that grutched has a wonderful sound to it and that it should be more commonly used. In Newton’s time it was still employed in the sense of being reluctant to give or allow something, to begrudge, but it seems to have gone out of mainstream English currency around 1700. It lasted long enough in a few local dialects for it to be included in the English Dialect Dictionary at the very end of the nineteenth century and to be resurrected, temporarily, by Rudyard Kipling in his Barrack-Room Ballads (“I paid my price for findin’ out, / Nor never grutched the price I paid”). Its origin is the Old French word groucier, to murmur or grumble. Our modern grudge is an altered form of it.

Beware of the invitation One form of online confidence trick is aimed at scientists and technologists, always eager because of the pressure to publish to take up invitations to present a paper at a prestigious conference. E-mail messages and websites advertise a conference in their field with a personal invitation to take part, subject only to the usual conference registration fee. A gullible booker finds too late that the conference doesn’t exist — it’s a scamference. The term dates back to the middle of the last decade.

Deus ex moneta For the first time ever, journalists were allowed into the Vatican Bank this week. They found an ATM in the banking hall that displayed its messages in Latin. Deductio ex pecunia means “cash withdrawal”. But what’s the Latin for “international requirements on financial transparency”?

Q From Malcolm Sealy: I often hear to wag off here in Australia — meaning to cut classes — and thought it was an Australianism. However it seems to have been in use in England at the end of the nineteenth century, as Jerome K Jerome uses it in Three Men on the Bummel. Any ideas on its derivation?

A It’s rather older than Jerome. It certainly is British, having been first recorded here:

Dombey and Son, by Charles Dickens, 1848

My wife remembers taking a day off when she was a student teacher at a London school in the 1960s and being asked the following day by a child, “Was you hoppin’ the wag, Miss?” That’s recorded a century earlier, from the 1860s. Other formulations have been documented:

The most general term for truancy seems to be “to play hookey” (an Americanism which became naturalized around 1900), although very often, particularly in the north, young ne’er-do-wells use the older phrases “playing wag”, “playing the wag”, “hopping the wag”, “wagging school”, or “wagging it”, speaking with the same tongue boys used in the time of Dickens.

The Lore and Language of School-children, by Iona and Peter Opie, 1967.

My impression is that wag in its various forms is still known in the UK, though it’s local. Around here in Gloucestershire, skiving and bunking off are usual. I remember Sir Paul McCartney a couple of years ago referring to sagging off school during his Liverpool childhood. Nobbing, dodging, plunking and twagging are also known in various parts of the UK. The last one is fairly recent and some writers have suggested that it derives from wag.

Otherwise, we use the verb wag these days almost exclusively to mean moving something rapidly from side to side (or up and down): a dog wags its tail, a person may wag his finger as a warning or a reprimand, or gossips may wag their tongues. This is ancient: it appears in the fourteenth-century poem Piers Plowman by William Langland, though he meant by it a boat rocking from side to side (it’s from Old English waggian, to shake).

Earlier still it could mean to move one’s limbs with difficulty, to totter, stagger, or walk unsteadily. The mental picture of side-to-side movement may have emerged from this. The Dictionary of American Regional Usage records wag from some parts of the US in the sense of staggering along, especially under a heavy load, and so to carry something heavy. A person who was swinging from a rope after being hanged was at one time said to be wagging, which led to waghalter for a man who was going to be hanged, or deserved to be. Though the evidence is indecisive, it may have been abbreviated back to wag and softened to mean a mischievous prankster or youth — hence wag for a facetious person or practical joker. (Recent wag for a wife or girlfriend is an acronym.)

The unsteady walking sense evolved into wandering about from place to place or moving away from some place, especially with difficulty or under pressure to remain. The idea of truancy evolved from this, though uncertainty about the source of the mischievous youth sense of wag leaves the experts uncertain whether it might be from waghalter instead.

• This appeared in the New York Times magazine on 17 June, Sarabell Stoll tells us. “When Pablo Escobar was Chapo’s age, he had been dead for more than a decade.”

• An article in the Guardian on 23 June described a possible reaction of a hospital patient seeing a clergyman approaching his bed. “Is he here to give me the last rights?” Unfortunately, the writer was Giles Fraser, formerly Canon Chancellor of St Paul’s Cathedral.

• On 19 June the Australian Government released a report, catchily entitled Post Implementation Review of the VET FEE-HELP Assistance Scheme. Gavin Moodie found this sentence in it: “Consideration also needs to be given to the role played by other relevant bodies to ensure, where possible, ongoing alignment in policy and minimisation of regulatory duplicity.”

• A report on ABC News online on 27 June interested Brian Barratt. Below the headline, “Cops scour Darwin bush for beheading suspect”, one line read “Police cars are patrolling the area, and a chopper is circling above.” Add your own punchline.

• Raymond Noë wrote from The Netherlands concerning a headline he had seen in the New York Daily News of 26 June: “Reading books will help shorten Brazilian prisoners’ sentences”. But as he says, improved literacy may equally result in their sentences getting longer.