Glass slipper Roger Depledge doubted my French translation. “Balzac indeed wrote ‘sans doute de menu vair’ about Cinderella’s shoes, but do not make him more categorical than he was, even for a Frenchman. ‘Sans doute’ is a common semantic false friend; it means ‘probably’ or ‘presumably’. ‘Without (a) doubt’ is ‘sans aucun doute’.”

Asparagus Pat Gadsby commented, “Grass is a common name for this vegetable in East Anglia and its use has caused a great deal of concern among my visitors from the USA when I tell them I am going to buy some.” Anne Osborne added, “A pub near Evesham, at Badsey, is called The Round of Grass. Evesham is still great asparagus-growing country and I believe bundles of asparagus are even now sold as ‘rounds of grass’.”

“Sparrowgrass put me in mind of sparrow iron,” Don Donovan wrote. “Many buildings in New Zealand use corrugated iron, mainly for roofs. While doing illustrations for my books about NZ architectural subjects I came across sparrow iron, a material that seems to have been used in early years but which does not appear to be available now. It has much finer corrugations than usual and is more attractive. Why it was called sparrow iron defeats me.” I have found references to it in British sources, one of which asserts it was given that name because the sparrow is such a small bird. It’s as good an answer as any in the absence of authoritative research, but don’t quote me!

Umbrage is offence or annoyance. These days we almost always take umbrage, the two words having been conjoined into a fixed phrase. It is less common to hear of people giving umbrage, though someone who takes umbrage presumably has had it inflicted on him by another. Or does this imbalance imply that the perceived offence is almost always in the mind of the receiver?

Umbrage derives from Latin umbra, shadow, and that was its first meaning in English. A tree might cast umbrage and in later centuries its foliage came to be its umbrage. Shelley wrote “The tall ash and oak, in mingled umbrage, sighed far above their heads.” In the time of Shakespeare, an umbrage was a shadowy outline (Hamlet uses it for the shadow of a man), which led to its suggesting somebody lurking out of plain view. From this grew ideas of being under the shadow of suspicion and being in disfavour and indirectly to our modern senses of annoyance, offence or resentment.

Umbrage has almost entirely severed its associations with shadows, but its adjective umbrageous usually refers to shade, most often that cast by trees. We have lost its relative umbratile, which once referred to a reclusive person, one who kept in the shade by staying indoors. However, we retain another relative, umbrella, originally a sunshade, which came into English via Italian.

• The word of the week must surely be parbuckling, which has been widely used in the media in connection with the salvaging of the cruise ship Costa Concordia. Though unknown to most of us, it’s a term of art among marine salvage specialists. The technique — though more rarely the word — is known to others who have to move heavy objects about. When I used to 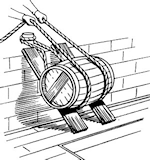 see draymen rolling casks of beer down a ramp into the cellar of my local pub using a pair of rope slings to control their movement, I didn’t know that was parbuckling. Foresters use the same technique to roll heavy logs along the ground. The term is appropriate for the Costa Concordia because ropes and other equipment were used to rotate the ship away from the rocks on which it was stuck. The word’s history is obscure; it appeared in the seventeenth century as parbunkel, with the first part possibly being a variant of pair. The second part was later modified by folk etymology, most probably on the assumption that it was related to buckler for a small shield or for the moveable head of a cask used to compress its contents.

• Before I went on holiday, Richard Winter asked me about a word he had encountered in a football report by Simon Barnes in The Times on 26 August about a match that had to be abandoned because the pitch was waterlogged: “Wimps. Waterlogged pitch indeed. Lookshurry!” I found other examples of this slightly weird exclamation, mostly in sports contexts, which seem to suggest that something is excessive or over the top. I have been quite unable to trace its origin or find out anything more about it.

• In my youth, so long ago, when we bought something that wasn’t new, we called it second-hand or used. More recently, we in Britain have learned the American pre-owned and pre-loved but we have never taken them to our hearts. We’re beginning to see another American import, luxecycled. Such items have been creatively recycled for new owners — decorated and restyled beyond their original state of newness, at least to the eyes of their embellishers. The more common US term for the process is upcycling, but to luxecycle something would seem to be taking the process to extremes.

Q From Chuck O’Brien: I searched your site (perhaps not thoroughly enough?) looking for the word rhino, meaning money, which you mentioned in your piece some time ago about pony up. It also appears in the short story by Washington Irving entitled The Devil and Tom Walker. Where does this come from?

A Rhino is one of the more ancient, curious and perplexing slang terms for money in the English language. It originated in Britain and was taken to other English-speaking countries by emigrants. It has had a long life — though it begins to appear in the written record in the 1620s, it continued to pop up well into the twentieth century. Its heyday was the nineteenth:

“But there’s one thing needful — and that is the needful.” “Money?” suggested Alaric. “Yes, money — cash — rhino — tin — ready — or by what other name the goddess would be pleased to have herself worshipped; money, sir; there’s the difficulty, now as ever.”

The Three Clerks, by Anthony Trollope, 1857.

The obvious assumption is that it’s the same word as the abbreviated form of rhinoceros, whose name is from Greek words that literally mean nose-horn (Greek rhinos, nose). Much speculation has been built upon this supposed connection, some of it attempting to link rhino with paying through the nose, another seventeenth-century idiom that has acquired fanciful etymologies of its own. It has been argued that monetary rhino came about as a reference to the high value of rhinoceros horn, a supposed aphrodisiac.

The big problem with such attempts is dating. At the time the slang term was first recorded, only two rhinoceroses had been brought to Europe, in 1515 and 1577, both gifts to Portuguese royalty through Portugal’s maritime contacts with India and the East Indies. The first to be seen in England arrived only in October 1684, by which time rhino had long been established in its monetary sense. (This rhinoceros had been imported from India by a ship’s captain named Henry Udall, who unsuccessfully hoped to sell it at a good profit, though after the failure of an auction it ended up being exhibited at the Bell Savage Inn on Ludgate Hill in London.) When another rhinoceros came to England in 1739, it was still exotic enough to be described in the London Daily Advertiser as a “strange and wonderful creature”. It would be surprising for an animal so little known in Britain to have generated a slangy abbreviation. Jonathon Green, the slang lexicographer, has remarked that the efforts to forge a link show “a certain lexicographical desperation”.

We have to presume that the true origin lies elsewhere, though we haven’t the slightest idea where that might be. However, it may be that the arrival of the first rhinoceros in England created a link between it and the existing slang term. A little while after its arrival this appeared:

My lusty rustic, learn and be instructed. Cole is in the language of the witty, money. The ready, the rhino; thou shalt be rhinocerical, my lad, thou shalt.

The Squire of Alsatia, by Thomas Shadwell, 1688. Cole is now spelled coal, a valuable mineral.

This hinted at a link with the animal through rhinocerical, which Shadwell invented and which became a fanciful adjective in the next century for being rich. Might he have had in mind the animal that was languishing in the courtyard of a London pub and generated a pun on its name and the existing rhino? If so, it’s his fault that later generations of word sleuths got the wrong end of the stick.

Incidentally, Thomas Shadwell’s text shows that ready (later the readies) was already in use. It’s short for ready money, cash or funds immediately available for use, which dates from the 1420s. The composite ready rhino appeared in 1697. Like rhino, it continued in use for a couple of centuries and it was punned upon in the first known use of rhino for the animal, thus turning the term full circle:

The Black Rhinoceros of Equatorial Africa ... The promptness with which it makes its tremendous charges has earned for it, among European hunters, the soubriquet of the “Ready Rhino”.

• Bruce McKenzie shared this from the first chapter of Utopian Man, by Lisa Lang, of 2010: “Button-sized and made of copper, he has planned the medals as a gift for his customers.”

• Grant Agnew’s electricity company, EnergyAustralia, is inviting its customers to register for a new email newsletter. Grant reports that it has issued the following instruction: “Your password must be at least eight characters long. ‘Password’ is too short.”

• Wracked wrecking. Julane Marx spotted this about Miley Cyrus on the MSN Wonderwall: “Her video for Wrecking Ball, in which she appears in the nude while swinging on a large demolition ball, broke the record for most online views in the first 24 hours following a premiere; the video wracked up a whopping 19.3 million views in its first day.”