Comprise Dave Hay commented, “I don’t have a problem with the active form of comprise, as in ‘Scissors, thread and sewing cards comprise the kit’. Indeed I use the expression more often than the more ‘correct’ one you cite. But comprised of is an abomination. This is because people really want to say composed of, but imagine that somehow comprised of is classier. It is not. It is simply wrong. Say composed of instead.”

Several readers noted that comprise is a term of art in patent law and means “include”, the exact opposite of its everyday sense. Many recent US patents include this preamble: “Throughout the description and the claims, the words comprise, comprising, and the like are to be construed in an inclusive sense as opposed to an exclusive or exhaustive sense; that is to say, in the sense of ‘including, but not limited to.’” Jonathan Bentley added, “In patents, the opposite of comprise is consisting of, which means that the invention is limited to what follows, nothing more or less.”

Of all the criticism that I feared might follow this mildly contentious piece, I wasn’t expecting most would refer to my use of singular their in “for a serious writer who values their reputation”. I stand firm. But see Sic! below.

Jobsworth is a censorious British term for an official who upholds rules at the expense of humanity or common sense.

How on earth could we have created a system that allows a little jobsworth social worker to throw his weight around in this absurdly dehumanised way, which makes a complete mockery of the claim that the system’s only concern is to put “the interests of the child” first?

Jobsworth has been in use since the early 1970s, sometimes in the mock polite form Mr Jobsworth (jobsworths are usually presumed to be male). The BBC television programme That’s Life! popularised it in the early 1980s through its creation of the Jobsworth Award for obstructionism beyond the call of duty. Esther Rantzen, the show’s presenter, said that it was for “the stupidest rule and the official who stamps on the most toes to uphold it”.

In origin jobsworth is a neatly abbreviated reference to it’s more than my job’s worth, either the ostensible excuse for his action by a minor functionary delighted to be able to use his authority to thwart his fellows or the cry of someone frightened of using his initiative and risking his position. The longer expression is well enough known that when Howard Lester collected examples of jobsworths at work in a book in 2012 he did so under that title.

It began to appear at the beginning of the twentieth century, though in this early example the policeman isn’t a jobsworth but he is afraid that a rule-bending good turn will attract the ire of his superior:

The policeman wheeled round again and spoke in a hurried whisper. “You can’t do it now, sir,” he said. “The inspector’s coming along. It’s more than my job’s worth if he sees you. You walk round and come back again in five minutes. Quick now, sir.”

In verbimoriam Friday 22 November is the fiftieth anniversary of the assassination of President John F Kennedy. By an awful coincidence, his end overshadowed the deaths the same day of the British authors C S Lewis and Aldous Huxley. Lewis is recorded in the Oxford English Dictionary as first recorded user of several words that you may not recognise: planetolatry, the idolatrous worship of the planets; poetolatry, immoderate veneration of poets; and rhetoricisation, presentation in line with the principles of rhetoric. He is also credited with the first use of Tolkienian, relating to his close friend J R R Tolkien or to his writings, and escapist, someone who seeks distraction from reality or routine. Huxley’s most famous creation was hypnopaedia, sleep-learning, which he used in Brave New World in 1932 with sexophone, a musical instrument that produces sexual sensations. His recorded first uses are more worldly than those of Lewis. They include good-timer (a person who pursues pleasure recklessly), nymphomaniacal, and callipygous (having beautiful buttocks, a less common form than callipygian, which I’ve written about here).

Out to grass Frances Beith asked about the origins of gardening leave (also garden leave), a period of enforced leave from a post in a commercial or public organisation. The practice is widely used, especially in the UK, to prevent a disaffected employee from gaining access to sensitive information or to stop someone accused of a disciplinary offence from influencing a subsequent investigation. But its origin seems to lie in the armed services, as it’s mentioned in a question to Parliament in June 1917 in connection with pay for servicemen on leave; as it appears without any explanation it may have been a customary term even then. It’s described in Brassey’s Defence Yearbook for 1978 as “the military euphemism for what is colloquially known in theatrical circles as resting.” As any actor will forcefully tell you, the difference is that gardening leave is paid.

Riled-up neebs Jonathan Meades wrote about picture postcards in the Guardian last week. He mentioned that the line down the middle that separates the message from the address is called the rile, though he can’t find its origin. He adds that the rectangular box top right showing where to stick the stamp is called a neeb, from “Dieter Neeb, the publisher from Fulda in Bavaria who invented the marking”. I can find nothing about either word in the postcard sense anywhere and suspect a leg pull somewhere along the way.

Q From James Agenbroad: I was of the impression that cracker jack was originally used to describe a squared-away US sailor, related to the early meaning of the term crack which you described in a recent article, and with jack tar for a sailor. Then it was appropriated for a brand of candied corn. Is this right?

A Crackerjack, spelled like that, is now widely known everywhere English is spoken as a way to identify something as excellent. (Here in Britain it’s inextricably linked to a BBC children’s TV programme of that name, which ran from 1955 to 1984.) In origin, though, it’s as American as you are, Mr Agenbroad.

Let’s start with the candied corn. North American readers will know of this long-established proprietary snack of sugary peanuts and popcorn, for which advertisements first appeared in newspapers in 1896. An often-retold story about its naming has an early customer saying “it’s crackerjack” on tasting it. That must be apocryphal, though it’s certainly possible that an early user might could described it that way.

That’s because crackjack for something excellent had appeared about a decade earlier, initially as a slang term in horse racing, and sometimes as two words:

Among horsemen generally, the opinion was that Proctor Knott would, in time, be put in first-class condition and that it will take a “cracker jack” to beat him next year.

It quickly became fashionable and was applied to champions in the new sport of cycling, to excellent baseball players, successful gamblers and generally to anything or anyone superb or superior in quality. It was a savvy choice of name for the snack. 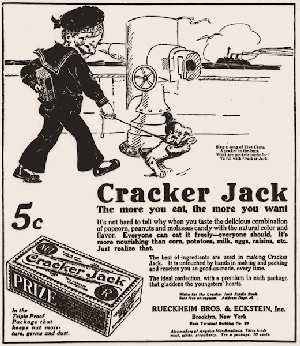 An early advert for Cracker Jack.

You’re right to link the first part of the term with the much older user of crack as a term of approval, a usage I discussed recently in connection with crack shot. Jack here was probably added to rhyme with crack to make the epithet more bouncy, although it could be — as you suggest — the generic term for a man (as in jack tar and jack of all trades), which would make crackerjack a person with excellent qualities.

US Navy sailors have been called crackerjacks, though that’s a transferred term from the nickname for their blue uniforms, which are formally called enlisted service dress blues. Its source is advertisements for the Cracker Jack snack, which from 1916 began to feature a uniformed Sailor Jack (and his dog Bingo) and the term was taken up by US Navy sailors themselves.

In short, the usage has changed greatly over time: crackerjack first denoted excellence, then it became a trade name, then it was transferred to a particular US naval uniform and then sometimes to the sailors who wore it.

• John Pearson found this in an article of 5 November on the website of the Smithsonian Magazine: “In an attempt to consolidate the power of their two businesses, Mr. Ponsardin and Mr. Clicquot did what any shrewd business owner in the 18th century would have done: married their children.” To each other, it transpired.

• “It seems an odd mandate,” was Bill Snowden’s response to November’s issue of the Atlantic: “The most recent example is Tuesday’s defeat of Washington state’s Ballot Initiative 522, the latest of several statewide initiatives to require GMO labeling to fail.”

• “Laid-back drivers escape electric-car battery fire”, the Detroit News might have headlined a story of 7 November on the basis of a sentence in it which Dan Aldridge submitted: “The good news is that drivers have enough time to get out of the car, and don’t appear to initially be as intense as an exploding gas tank, Kane said.”

• A piece in the Independent on 2nd November about the last episode of the Poirot TV series was spotted by Len Blomstrand and Oscar Heini. It contained the revelation that “The wrap party was held in a marquis in the grounds of the house”.

• An anonymous contributor reports that the website of WDIV-TV in Detroit had an article on 12 November that could have been better punctuated: “As he was walking through Meadowbrook Hall he saw something that made his heart stop hanging in a dark corner of one of the rooms.”

• Paul Madarasz pointed out that the care2.com website wrote about an attack on a “gender-neutral” California teenager who wanted to be referred to as “they”. The website respected their wish but tripped over its pronouns: “Sasha suffered second- and third-degree burns to the legs that will require significant skin grafting. They will probably be hospitalized for two to three weeks.” Just the legs?