Janopause After I wondered in last week’s issue about spelling this neologism with an o in the middle, subscribers suggested en masse that it had been formed from January + menopause. You may be right, but no reader has yet been able to enlighten me why a brief abstinence from alcohol should be linked to a permanent cessation of female fertility.

Rick McArthur commented from Finland: “As there are less than six million Finns and knowledge of the Finnish language outside Finland is rare, it is unlikely to be more than an interesting coincidence that jano is the Finnish word for thirst (of all types). Finnish also has the useful property that words can be combined at will to create the required meaning or emotion. In this context, Janopause makes complete sense.”

Competition update Your additional votes last week kept World Wide Words well in the lead in the Macmillan Dictionary contest for the 2011 Best Website About the English Language. Until Wednesday, that is. We are now in second place and falling badly behind. Every vote is urgently needed! If you haven’t voted, please do so. (World Wide Words is on page three of the list.)

Your first thought may be of the famous Yale University in the US, or perhaps of a make of cylinder lock. Neither is the sense that’s involved here, though there is a close link with two colleges of Britain’s Cambridge University.

We are concerned here with mythical beasts. Classical and modern literature is full of them, ranging from centaurs and dragons to jabberwocks and Harry Potter’s blast-ended skrewts. This one is classical Roman, having first been described by Pliny the Elder. He gave it the name of eale and included it as one of the animals of Ethiopia:

It is the size of the river-horse, has the tail of the elephant, and is of a black or tawny colour. It has also the jaws of the wild boar, and horns that are moveable, and more than a cubit in length, so that, in fighting, it can employ them alternately, and vary their position by presenting them directly or obliquely, according as necessity may dictate.

The Natural History, by Pliny the Elder, circa 77 CE, translated by John Bostock. We know river-horse better by its ancient Greek name of hippopotamus. A cubit was a measure of length roughly that of the forearm, about 18 inches (44 cm). 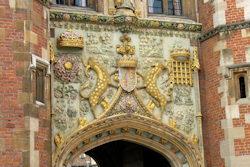 Nobody knows what animal Pliny was trying to describe. As so often, he may have been conflating inaccurate travellers’ tales about a number of different kinds of beasts, such as a type of big-horned African ox, an antelope or a species of goat. Following Pliny’s description, the yale is usually shown in illustrations as a mixture of bits of other animals, a chimera, with the snout of a wild boar, the body and head of an antelope, and a couple of long pointed horns of indeterminate origin.

The beast turns up in English heraldry in late medieval times, with its form borrowed from Pliny. By then its coat had changed to silver with gold spots. In herald-speak these are bezants, a name originally attached to gold coins minted in Byzantium. Because of the animal’s supposed skill in using its horns it came to represent proud defence. The connection with Cambridge University comes via Margaret of Beaufort, the mother of King Henry VII and reputedly the richest woman in medieval England. She founded two of the colleges of the university — Christ’s and St John’s — at the beginning of the sixteenth century. Because of this, her arms, including two yales, may still be seen over the gatehouses of the two colleges.

Halfway house The current constitutional kerfuffle between the UK parliament in Westminster and the devolved Scottish one in Holyrood is about Scotland’s status. Should it remain part of the UK, become an independent country, or be something in between? The last option, favoured only as a fallback position by the ruling Scottish National Party, is summed up in the political catchphrase devo-max, short for “maximum devolution of powers”, which has recently appeared almost daily in most serious British newspapers. Among other matters, the SNP wants the power to set, raise and keep taxes, with a proportion remitted to London to pay for its share of the costs of defence and foreign affairs (the jargon term for this is fiscal autonomy). The UK government objects strenuously and wants to keep devo-max off the ballot paper in a referendum proposed for 2013 (by Westminster) or 2014 (by Holyrood, as it is the symbolic 700th anniversary of the Battle of Bannockburn in which the Scots under Robert the Bruce gave the English a bloody nose). Devo-max is first recorded in 2007 in a book by Henry McLeish and Tom Brown, entitled Scotland: the Road Divided.

Are we there yet? As if we weren’t beset by enough worries in these troubled times, another concern has appeared in recent months: range anxiety. It’s said to be suffered by drivers of electric cars who have a continual nagging fear that the charge on the vehicle’s battery isn’t enough to get them to their destination.

What’s in a name (a very occasional series) Two years ago, readers listed animals whose names suggested an emotion, such as the sarcastic fringehead, the depressed mussel, the blushing snail, the melancholy woodpecker and the confused flour beetle. Clark Stevens pointed out an item on owlet moths in the current issue of Audubon Magazine, which records that among the 35,000 species worldwide are the festive midget, the confused woodgrain, the thoughtful apamea and the ignorant apamea. Mr Stevens notes, “the lepidopterological nomenclators seem to be a fanciful bunch.”

QFrom Peter Butler: There are two Australian phrases which I understand but have no idea how they came about: don’t come the raw prawn with me and don’t piss in my pocket. The first is used to mean don’t present an idea to me that is underdone or not thought out. The other is used in the context of don’t attempt to flatter me. How do you get from that to pissing in someone’s pocket? Can you advise if you have the origins of these phrases? And if not I wish you happy hunting.

A With the first of these, my principal feeling — being about as far away from its stamping ground as it’s possible to be on this planet — is that it would be good if everybody concerned agreed on what’s meant by coming the raw prawn. In addition to yours, I’ve come across the definitions “to try to impose on someone, as though playing the innocent”, “an act of deception; an unfair action or circumstance, a raw deal”, “to try to deceive; to misrepresent a situation” and “to act resentfully or unpleasantly; to be rude”. These are all, I suspect, attempts to categorise a colloquial saying whose meaning shifts erratically and unconsciously according to the situation in which it’s used. The general idea may perhaps be best summed up as “don’t try to put one over on me”.

After that, don’t expect a definitive answer about its source. The best I can do is point to a progenitor, the slang term prawn for a fool, perhaps from the idea of a prawn being a stupid-looking marine animal. It’s known from the late nineteenth century.

Well, boys, the “Worker” is a prawn — a fool for all his pains; He has the muscle and the brawn, the “Fat Man” has the brains.

The Cornstalk: his Habits and Habitat, by Daniel Healey, Sydney, 1893.

The evidence suggests that the fuller expression was a product of service slang in World War Two, perhaps in part based on this usage. In May 1942 the Sunday Times of Perth listed it with other slang expressions then current among AIF servicemen in the Middle East. The earliest appearance I know of is in a publication called Any Complaints, published in Newcastle NSW in 1940. There may be a link with the “green” quality of raw prawns, suggesting greenhorn, but this doesn’t really fit the meaning. A more probable idea behind it was that the story the speaker was being told was as hard to swallow as an uncooked crustacean.

As to the second expression, I agree that to piss in somebody’s pocket seems like a strange way to curry favour or ingratiate yourself. I suspect that the idiom is suggesting how close you have to be to somebody in order to do this. It’s a modern Australianism, recorded from the 1960s, but a precursor — pissing down any one’s back — is recorded in the same sense in the 1811 enlarged edition of Francis Grose’s Dictionary of the Vulgar Tongue. Beyond that I cannot go.

• This is a good example of our perennial, the misplaced modifier: “Having been a boarded-up eyesore for nearly six years, I am extremely pleased that the development project for the Metro Theater on Union Street is finally making its way through the Planning Department.” Thanks go to Nancy Miller, who saw this in the Marina Times, a San Francisco neighbourhood newspaper.

• Nancy Leek tells us she was considering joining a gym near her home in California. She thought again after reading on its website. “At Chico Sports Club we believe in moving the body. CSC also believes that being present in the body is important to achieving wellness.” Not to mention continued conscious existence.

• The Spring 2012 issue of the National Trust magazine startled Teresa Lander with this sentence, “To mark the centenary of the death of one of our founders, Octavia Hill, there will be a programme of events across Kent, the county she later made her home”.