Hunting through an electronic database of ancient US newspapers the other day, I came across this squib by the editor of the Mansfield News Journal of Ohio, dated March 1942:

Hamburgers are known to everybody. Newer, but still familiar, are steakburgers and cheeseburgers. Now comes a Florida restaurant advertising turtleburgers. The idea has possibilities. There could be fishburgers, jellyburgers, eggburgers and chickenburgers. No one contemplating these developments could call our language dead.

It set me on a trail to discover more about the linguistic legacy of this iconic American food. It’s well known that the original was Hamburger steak, a thin patty made of ground beef seasoned with onions and fried. It began in (or became associated with) the north German port of Hamburg in the middle decades of the nineteenth century, the ending -er being the standard German way of making adjectives that related to place. The hamburger concept was introduced into North America by immigrants from Germany from the 1870s onwards (the exact sequence of events still being a matter of historical controversy), with the term being recorded in print for the first time in The Caterer and Household Magazine in August 1885. The idea of putting it in a sandwich followed in the 1880s (it’s often said it was invented at the 1904 World’s Fair in St Louis, but it certainly predates that event) and the classic bun seems to have followed shortly afterwards. 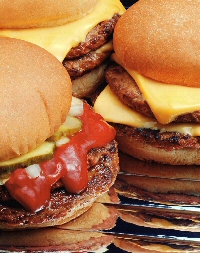 Despite the fact that it was well known that hamburgers were made from beef, Americans somehow got the idea that the word was made up from ham and burger. When inventive cooks started to make the patties from other sorts of meat, or add other ingredients, the linguistic basis was there for -burger to become a semi-detached ending to be stuck on to other words (what grammarians call a combining form); it began life around 1930 and became so popular during that decade that a writer in American Speech in 1939 was able to call it “a favorite broth of the word-brewers”.

The first compound I can find evidence for is lamburger. An example turned up in the Helena Independent of Montana in September 1930: “The dinner ... originally planned has been called off but Eddy Gallivan will serve ‘lamburger’ sandwiches and coffee during the sale. Lamburger is a comparatively new dish, the principal ingredient of which is lamb meat, which takes the place of beef in the old-time hamburger.”

Cheeseburger was next up, which is listed in diner menus in newspaper advertisements from 1936 onwards. Also from that year is beefburger, perhaps created by some literal-minded cook worried that the name hamburger would confuse people about its principal ingredient, or just conceivably a signal to word watchers that people were beginning to be unsure about what actually went into those flat fried slabs. The following year, fishburgers and steakburgers appear, as does another variety, one promoted in the Limestone Democrat of Athens, Alabama:

These chickenburgers are a versatile dish, too, for they go equally well as the entree of a Sunday supper or luncheon and as a “snack,” disguised like its more lowly relative, the hamburger.

Turtleburgers appear in 1940; a newspaper in Massachusetts reported that the residents of Key West, Florida, had solved the problem of being 180 miles from their nearest suppliers of meat by making creative use of what was available; turtleburgers were a luxury item among tourists, the reporter wrote — 25 cents each. An enterprising but surely unsuccessful businessman advertised during 1941 for entrepreneurs to invest in his scheme for selling oysterburgers, oceanburgers and seaburgers, the last of these made from lobster and shrimps. Octoburger, containing octopus, appeared the following year.

The editor of the Mansfield News Journal was clearly lagging behind the breaking wave of linguistic invention by suggesting that some of these terms were new or even remained yet to be invented. He was right about eggburger, though, which is first recorded in the newspaper database only in 1947. We have yet to see a jellyburger.

The step that the editor missed was the development of burger as a generic standalone term. This starts to appear in earnest the year after he wrote. The evidence suggests that it was made popular by meat rationing (older Americans will remember the red points that controlled how much you could buy). Many ingenious ways were sought to pad out limited supplies, especially using up scraps and offcuts of diverse meats in patties. Government-inspired articles and ingenious advertisers put forward veal burgers, liver burgers, and even Bologna burgers, as well as eking out what you had through creating the potato burger and the bran burger, the latter made in part of Kellogg’s All-Bran.

The next culinary-linguistic wave came in the decades after the end of the war, when exotic varieties spawned, such as turkeyburger (1945), porkburger (1947), gatorburger (alligator, 1959) and mooseburger (1953, appropriately from Alaska). Vegetarians were also active, creating the nutburger in 1945 and the vegiburger in 1967. The soyaburger appeared first in fiction, in 1953, in the futuristic SF satire on the Madison-Avenue advertising industry, The Space Merchants, by Frederik Pohl and C M Kornbluth; in real life it was first noted in Canada in 1973. There have also been sightings of buffaloburgers, ostrichburgers, rabbitburgers, gooseburgers, duckburgers, and spamburgers

These Californians have also forsaken beef entirely and come up with the shrimpburger, the tunaburger, the chickenburger, the lambburger, and the whaleburger. The lobsterburger and the crabburger are just around the corner. Not far away are the beanburger and the peanutburger for vegetarians. But the apex or summit or something has been reached in Kansas City, where, according to reports, they are now serving the coonburger, made from carefully chopped raccoons, with onions and garlic salt added. The Constitution guarantees every man the right to eat a coonburger if that’s what he wants, and here it is — the finest flowering of the lowly hamburger.

After that, it’s a relief to learn that jumboburgers (1945) don’t contain real elephants, that bunnyburger (1941) was a short-lived name for a kiddies’ treat devoid of disquieting associations with our furry friends, and that a mouseburger isn’t designed to be eaten, but is a US slang term for “a young woman of unexceptional appearance and talents”. However, readers of a sensitive disposition may wish not to dwell on the implications of the term Bambiburger that was mentioned by World Wide Words subscriber Ken Hughes.

The oddest thing about the false analysis that spawned all these compounds is that few people make literal hamburgers out of ham, though baconburgers — beef hamburgers embellished with strips of bacon — have been sold since at least 1947.