A term new to almost everybody suddenly appeared all over the British press in October and early November 2007 as the result of a survey of our eating habits by the supermarket chain Sainsbury’s. Since meals are now so informal, often eaten on the sofa in front of the television, traditional cutlery is too much hassle. The survey reported that 11% of 18- to 34-year-olds did away with knives and instead used a fork as an all-in-one eating tool. 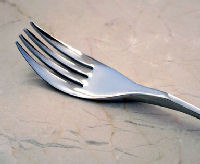 The survey called this a knork, which is too specific a term for what is after all just an improvised device. The real knork is an invention of 2003 by a young American entrepreneur named Mike Miller, whose UK sales prospects have had a wonderful PR boost as a result of the survey. His knork is a combination knife and fork of stainless steel, with an enlarged handle for gripping and outer tines bevelled into a curved shape to help it cut foods. The word is, of course, a blend of knife and fork and is said with the initial k silent. It’s hardly a felicitous formation and it must surely be a barrier to its adoption.

A survey of the combination cutlery field with the help of readers to the World Wide Words newsletter showed what a crowded field Mr Miller has entered. His own countrymen decades ago created another device that is in widespread use — the spork, a spoon with prongs at the end of the bowl. The word is first recorded in the Century Dictionary in 1902 but the term was only trademarked in 1969, suggesting that the word had not in the intervening period gained any currency. That trademark application called the spork a “combination plastic spoon, fork and knife”, which is not how most people know it today, though such triple appliances are made under the same name as well as devices that consist of a spoon at one end and a fork at the other. Erin McKean described it in the On Language column in the New York Times in July 2007 as “a harmless plastic makeshift, a benighted fork-spoon hybrid”, which is perhaps a harsh put-down for a little tool that’s useful in its place. 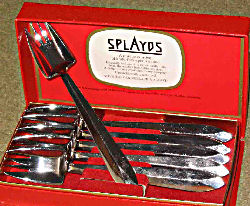 Australians have their own knife, fork and spoon combination, just right for eating one-handed at a barbie. It’s called a splayd, a blend of spoon and blade. The Sydney Powerhouse Museum explains that it was invented by William McArthur in 1943 but that it became much more popular after the rights were sold to a manufacturer which released its own design in 1962. Jennie Booth noted that “Splayds, rather than toasters, are the wedding gift that jokes are commonly made about.” Laurie Malone said “They are very handy at cocktail parties when you are trying to manage a drink, a plate and trying to eat the food without spilling anything.” But Ron Tier was less enthusiastic: “They don’t offer much advantage over the traditional fork. The spoon area is too small to hold any significant amount of liquid, and the edges cut no better than the edge of a fork.”

Many readers remembered The Owl and the Pussy Cat by Edward Lear: “They dined on mince, and slices of quince / Which they ate with a runcible spoon.” Lear invented runcible, but he gave no hint where it came from or exactly what it meant; his drawing of a runcible spoon in The Dolomphious Duck is of a fairly conventional long-handled spoon. However, people soon found uses for the term. It is explained thus in the 1894 edition of Brewer’s Dictionary of Phrase and Fable: “A horn spoon with a bowl at each end, one the size of a table-spoon and the other the size of a tea-spoon. There is a joint midway between the two bowls by which the bowls can be folded over.” The Oxford English Dictionary says it was applied in the 1920s to what it describes as “a kind of fork used for pickles, etc., curved like a spoon and having three broad prongs of which one has a sharp edge.” The term is now rare.

An much older device was famously used by Lord Nelson after he lost his right arm in an unsuccessful attack in the Canary Islands. The National Maritime Museum has it in its collection, and a picture is on its Web site. A short knife blade replaces one of the tines. It’s known as the Nelson fork; the term still turns up occasionally — a writer to the Guardian on 17 November 2007 said that her mother-in-law had habitually used a similar device that she called a Nelson.

To finish, there’s also foon, from fork + spoon. At least one firm sells an item under that name. It’s the same as a spork.