It appeared on English roads about 1818: a strange vehicle with two wheels, one behind the other, joined by a horizontal beam on which the rider sat, pushing the contraption along with his feet, a method which one US newspaper described as skating on land. This was an early precursor of our modern bicycle, the invention of a German named Karl Drais, whom an article in the Bristol Journal in 1819 described as “master of the woods and forests of his Royal Highness the Grand Duke of Baden”. 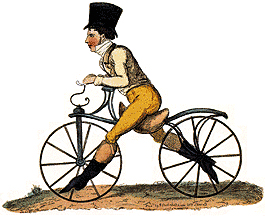 The name for the contraption was varied: Drais called it Laufmaschine, a running machine; the French at first named it draisine, from its inventor. The English had various names early on, including both of these, but also dandy-horse (since it was taken up by fashionable young men of the period called dandies) and hobby-horse (abbreviated to hobby), after the ancient child’s toy of a stick with a horse’s head. A US entrepreneur sold it as the Tracena, presumably a modification of draisine. Other names were walking accelerator and pedestrian carriage.

However, everyone soon settled on the mock-classicism velocipede (which first appeared in French, as vélocipède, taken from the Latin velox, swift, and pes, a foot, via their combining forms veloci- and ped-). The term survives in the modern French vélo, roughly equivalent to our “bike”. Its riders became known, of course, as velocipedists.

The machines seemed innocuous enough, but they caused problems. They weren’t easy to learn to ride, since nobody had any experience of the art of balancing required. The original Drais version had a brake, but the ripped-off French, English and American versions didn’t, which resulted in accidents. Roads, even in towns, were often so rutted that riders took to the pavements (sidewalks), to the terror of pedestrians.

Around 1850, velocipede began to be applied to a modification of the machine in which pedals were fitted to the front wheel, an early form of bicycle. The latter name eventually took over but more than a century after the machines that are correctly called velocipedes vanished from the roads, the name lingers on as a humorous way of referring to a bicycle and velocipedist to its rider.