In English towns a skimmington was a common way to express moral outrage at the actions of a member of a married couple, perhaps because the man was a wife-beater or the woman an adulterer. An important part of it was noise. Francis Grose described the way of it in his Dictionary of the Vulgar Tongue in 1796: “Saucepans, frying-pans, poker and tongs, marrow-bones and cleavers, bulls horns, etc. beaten upon and sounded in ludicrous processions”. So crucial was this element that another name for the custom was rough music; yet another was ran-tanning, probably an echoic phrase. 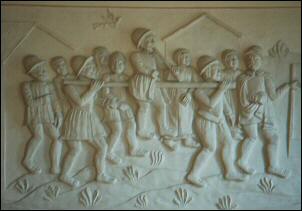 This plaster frieze, in the hall at Montacute House in Somerset, depicts a skimmington ride

Effigies of the guilty parties were paraded through the streets on a cart or the back of a donkey; sometimes neighbours would impersonate them instead. It was this part of the custom that was the skimmington, or skimmington riding. The word is obscure, but probably derives from a skimming ladle, shown in early illustrations wielded by an enraged wife. The custom is recorded from the seventeenth century onwards, in Pepys’s diary for example, and there’s a good description in Thomas Hardy’s The Mayor of Casterbridge of 1884:

The numerous lights round the two effigies threw them up into lurid distinctness; it was impossible to mistake the pair for other than the intended victims. “Come in, come in,” implored Elizabeth; “and let me shut the window!” “She’s me — she’s me — even to the parasol — my green parasol!” cried Lucetta with a wild laugh as she stepped in. She stood motionless for one second — then fell heavily to the floor. Almost at the instant of her fall the rude music of the skimmington ceased. The roars of sarcastic laughter went off in ripples, and the trampling died out like the rustle of a spent wind.

After this piece first appeared several American subscribers sent descriptions of a different custom with the same name. For example, Richard Wood wrote from Tucson:

When I was a young lad (more than 50 years ago) in rural northeast Pennsylvania, there was a ‘meeting’ held at a newlyweds home in the middle of the night, or later, and the newlyweds did not know when it was going to happen. It was called a ‘skimelton (sp)’. The word may have other spellings such as a ‘shiveree (sp)’. The meeting consisted of neighbors and friends sneaking up to the newlyweds home and suddenly blowing car horns, shooting off rifles and shotguns, pounding on metal wash tubs or anything to make a helluva racket. When lights came on in the house, everyone would enter with food, drinks, etc. and have a party that sometimes lasted until morning milking (it was a rural dairy area).

It seems skimmington had moved to refer to a more pleasant custom than the English one I described. Shivaree, as it is often spelled, is an adaptation of the French charivari (pronounced roughly like “shari-vari”) which in France was used for the same custom as skimmington, and seems likewise to have shifted its meaning. The OED gives an example of the word from Cassell’s Saturday Journal of 1883: “It was a shiveree — that is, the kind of serenade they give to a newly-married couple”. Noisy serenades of this sort were especially common when the marriage was a second one, or when the couple were badly-matched because of age, or for some other reason.

An earlier example, from 1857, appears in A journey through Texas; or, A Saddle-trip on the Southwestern Frontier by Frederick Law Olmsted: “In the evening we heard a din which proved to be a charivari, offered as a tribute of public opinion to a couple who had been married in the morning. The bride was suspected not to be immaculate. After some exhibition of endurance, the bridegroom, we were told, ‘caved and treated,’ that is, came to the door, and furnished drinks for the crowd”.

You can imagine how the custom might later have softened to one of the kind Mr Wood describes.

A related custom is known in Australia Michael Boddy wrote to say that “In Tasmania, where I lived for a while, this performance at a wedding night was known as a tin-kettling, which explains itself. It would also be put on if the locals disapproved of some action on the part of the person being tin-kettled. From what I remember it is a relic of mining days and the mining camps”. Peter Emery also wrote from Australia to confirm that the practice is known there, commenting that it is a custom now mainly of rural areas. The Oxford English Dictionary includes the term, and adds: “also to cause (swarming bees) to settle, by beating a tin-kettle”. That’s not something you need a word for every day.