It certainly looks weird enough. Until recently it was known only to historians of the theatre, but it’s having a rare moment in the spotlight. It was one of the words in the 2007 US National Spelling Bee, which brought on a fit of giggles on live television from the 11-year-old, Kennyi Aouad of Indiana, who was asked to spell it. 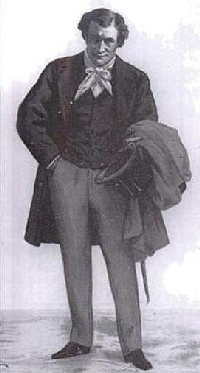 A sketch of Victorien Sardou
from the December 1880 issue
of Vanity Fair.

It commemorates the French playwright Victorien Sardou. He was extremely successful in the 40 years from 1860, creating more than 70 plays, some for the French actress Sarah Bernhardt. (The title of one that he wrote for her in 1882, Fédora, gave the English language a word for a new type of hat.) His plays were extravagant spectaculars, full of contrivance and written to a mechanical formula, often being designed as vehicles for famous actors and actresses of the day. So sardoodledom refers to a play with an over-written and melodramatic plot. His last big success was the historical play Madame Sans-Gêne in 1892, seen in 1897 in an English version starring Ellen Terry in the Lyceum Theatre in London.

In June 1895, George Bernard Shaw wrote a critical article in the Saturday Review under the heading Sardoodledom, a word he invented for the piece. He described Fédora as “claptrap” and he criticised Sarah Bernhardt for becoming involved in “a high modern development of the circus and the waxworks”. Shaw used the word again two years later in the same journal: “It is rather a nice point whether Miss Ellen Terry should be forgiven for sailing the Lyceum ship into the shallows of Sardoodledom for the sake of Madame Sans-Gêne.”

The word has since become shorthand for technically well-crafted works of the period — “well-made plays” — that were created as pure entertainment, lacking any moral or ethical position and featuring what one critic called “a poverty of thought”.