This word was in the news in 2009 and early 2010 for two reasons. It was cited as one of his favourite words by Ammon Shea, who read through the whole of the Oxford English Dictionary and published a book about it, Reading the OED. In February 2010, it was listed as an honourable mention in the Words of the Year list for 2009 published by the editors of the Macquarie Dictionary.

Petrichor is the pleasant smell that often accompanies the first rain after a long period of warm, dry weather in certain regions. It was named by two Australian researchers, who discovered that the smell is an oily essence emitted from rocks or soils. The oil is a complicated mixture of at least fifty different compounds, rather like a perfume.

The diverse nature of the host materials has led us to propose the name “petrichor” for this apparently unique odour which can be regarded as an “ichor” or “tenuous essence” derived from rock or stone. This name, unlike the general term “argillaceous odour”, avoids the unwarranted implication that the phenomenon is restricted to clays or argillaceous materials; it does not imply that petrichor is necessarily a fixed chemical entity but rather it denotes an integral odour.

I J Bear and R G Thomas, The Nature of Argillaceous Odour in Nature, 7 March 1964. (Argillaceous means “consisting of or containing clay”, from Latin argilla, clay.) 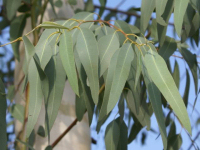 Eucalyptus, one source of petrichor

The oils are given off by vegetation during dry spells and are adsorbed on to the surface of rocks and soil particles, to be released into the air again by the next rains. The Macquarie Dictionary citation suggested that in Australia it is released by the leaves of eucalyptus trees; when it's washed by rain into watercourses it becomes a signal to fish, invertebrates, and other creatures that the season is sufficiently wet to support breeding.

The word comes from Greek petros, a stone, plus ichor, from the Greek word for the fluid that flows like blood in the veins of the gods. Petrichor is a poetic creation that means something like “essence of rock”. Alas, it is encountered only very rarely.

Besides the pleasant, dewy petrichor of the post-rain afternoon, I see no hope or way out of a four-hour ride with the enigmatic mumbler.