Isabelline refers to a colour. The dictionaries variously describe it as greyish-yellow, light buff, pale cream-brown, dingy yellowish grey or drab. The Merriam-Webster Unabridged Dictionary tries hardest to tie it down: “a moderate yellowish brown to light olive brown that is lighter and stronger than clay drab or medal bronze”. It has also been described as the colour of parchment or sand.

The female name Isabella can similarly refer to the colour. Its first appearance in English is in an inventory of the wardrobe of Queen Elizabeth I in 1600: “one rounde gowne of Isabella-colour satten ... set with silver bangles”. Versions of it are known in various European languages from about the same date, including French, German, Spanish and Italian, usually for the colour of a horse. 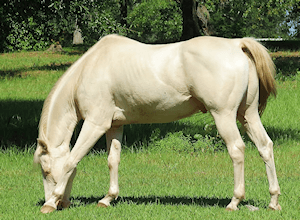 The origin is unclear. That has led to stories growing up that associate Isabella (and by implication isabelline) with an historical event involving a noble lady by that name. One identifies her as Isabel Clara Eugenia, daughter of Philip II of Spain, wife of the Archduke of Austria and joint sovereign of the Spanish Netherlands. Her brother, Philp III, laid siege to Ostend in 1601 and Isabella vowed not to change her undergarments until the city surrendered. Unfortunately for her (and no doubt for those around her) the siege lasted another three years, supposedly leading to this off-colour word for over-worn underwear. Other European nations have a similar story, though they apply it instead to the siege of Granada by Ferdinand and Isabella of Castille in 1491.

Isabelline is comparatively recent, appearing from about 1840 in descriptions by zoologists of a wide variety of species of bats, fungi, fish and mammals, but mainly birds, such as the isabelline wheatear and the isabelline shrike. Charles Darwin and Alfred Russel Wallace both used it, as did other writers of the nineteenth century:

To begin with, all the smaller denizens of the desert — whether butterflies, beetles, birds, or lizards — must be quite uniformly isabelline or sand-coloured.

Falling in Love; With Other Essays on More Exact Branches of Science, by Grant Allen, 1889.

It’s a specialist word of natural history writing and it’s rare to find it elsewhere other than occasionally as the horse colour.

Most experts say the proper name is the source, though nobody can explain how it came about. Some writers in French and Spanish say instead that it derives instead from an Arabic word, given either as izah or hizah, referring specifically to the colour of a lion’s pelt. However, there seems to be no such word in Arabic and we must disregard the suggestion.