In modern American slang a gunsel is a criminal carrying a gun. So it was natural that it should be spoken in the episode of Deadwood aired in the US this week. The two saloon keepers Al Swearengen and Cy Tolliver both refer to the brothers Wyatt and Morgan Earp, who had supposedly saved the stagecoach from road agents, as gunsels, meaning gunslingers. The summary of the plot on the Home Box Office Web site says: “Cy presents to Hearst his plot to engender a duel between Bullock and Wyatt Earp; ‘...whether Bullock or this gunsel stood at the finish there’d be no losing in it for you.’” 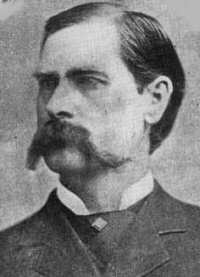 This man was not a gunsel, trust me.

Wyatt Earp, the famous marshal of Wichita and Dodge City, was certainly recorded as being in Deadwood in 1876, so the historical setting is right. But nobody could have called him a gunsel for two reasons: the word didn’t exist then, and even when it came into existence, about twenty years later, it didn’t mean a gunman but a raw youth. In particular, in convict and tramp slang a gunsel was a young homosexual male, especially one who was the companion of an older man. It is generally taken to derive from the Yiddish gendzel, a little goose, from German Gänslein, a gosling.

A plausible story of the way the word changed sense was set out by Erle Stanley Gardner in an article in the Atlantic Monthly in 1965. He claimed it was the fault of Dashiell Hammett. Together with Gardner, Raymond Chandler and others, he was a contributor to the old Black Mask pulp magazine edited by Joseph Shaw that featured naturalistic crime stories. But Shaw was dead against including vulgarisms and blue-pencilled some of Hammett’s underworld usages. To retaliate, as Gardner told the story, Hammett laid a trap for Shaw. In his next story he included the term gooseberry lay. Shaw pounced on this and rejected it, though it wasn’t a rude term at all but tramps’ slang for stealing washing off clotheslines to sell. But Hammett also included gunsel in the story, which Shaw left in, thinking it meant “gunman”.

The significant appearance of the word was in Hammett’s The Maltese Falcon, serialised in Black Mask in 1929 and published as a novel the following year: “‘Another thing,’ Spade repeated, glaring at the boy: ‘Keep that gunsel away from me while you’re making up your mind. I’ll kill him.” The word was spoken by Humphrey Bogart as Sam Spade in the 1941 film of the book and so became much more widely known. If you read Hammett’s description of the boy, you’ll realise that he was subtly making the point that he actually was gay, but if you hadn’t been tuned into that you might miss it.

In Australia an equally extraordinary but different shift in sense has taken place. In the spelling gunzel it means a railway or tramway enthusiast (otherwise in various countries a railfan, trainspotter or gricer). In early appearances it referred to the kind of scruffy, obsessive and over-enthusiastic fan who travels with notebooks and cameras and who would bore you to tears with arcane information if you let him get started. The new meaning is said to have grown up at the Sydney Tramway Museum in the 1960s through the reading of old American comics. These days, I am told, the term is worn with pride.