Q From Steve Simoneaux, Atlanta, GA: I’ve been overwhelmed and I’ve been underwhelmed. Is it possible to ever just be whelmed?

A You could once. But remember that underwhelmed started life as a joke based on overwhelmed and in language terms is relatively recent — it was first recorded in 1956, but became popular only a decade or so later. It’s common these days, because it fills a need for a single word to communicate the concept of failing to impress.

The verb whelm does exist, though you might search for some time before you find examples in modern prose. That’s excluding fantasy and historical fiction, of course — when S M Stirling wrote in On the Oceans of Eternity, “Whelm not our ships with Your anger, but give us swift voyaging and good winds, full nets and victory”, his choice of whelm was deliberately archaic, to help convey to his readers the sense of being in another time and place. On the other hand, to come across “It was a late-arriving crowd that saw the Hurricanes whelm the Philadelphia Flyers Saturday night”, which appeared in The News & Record of North Carolina back in 1998, is to be brought up short, wondering if the word’s a misprint. 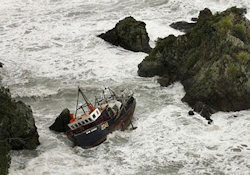 But it was once common. It started as a medieval English sea term meaning to capsize — it’s related to the even older whelve, to overturn. Around 1513, Robert Fabyan used it in The Newe Cronycles of Englande and of Fraunce: “By the mysgydynge of the sterysman, he was set vpon the pylys of the brydge, and the barge whelmyd” (in modern spelling “By the misguidance of the steersman, he was set upon the piles of the bridge, and the barge whelmed”). It could also mean to turn a hollow vessel upside down to cover something; in 1842 the Florist’s Journal wrote that “Pansies that were planted out in the autumn, should be protected by whelming a small pot over each plant.” It also came to mean, as an extension of the capsizing sense, being covered by water or drowning. Sir Charles Lyall used it that way in his Principles of Geology (1830): “Marsh land ... has at last been overflowed, and thousands of the inhabitants whelmed in the waves.” One might once have talked about the whelm of the tide, which covers the shore as it rises.

But a writer can’t use any of these senses any more, unless he’s deliberately using an archaism for effect, or is showing off his knowledge of language, or is perhaps archly trying to invent a new word, not knowing that whelm exists.